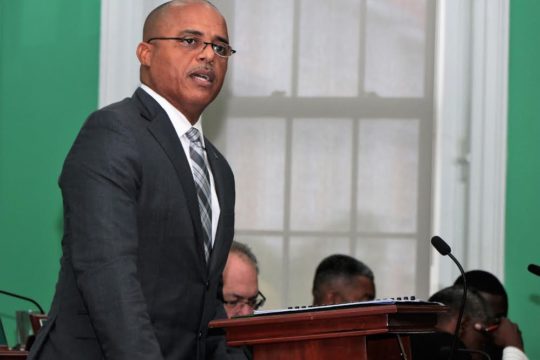 NASSAU, BAHAMAS — Renewing a cautionary warning to armed suspects, Minister of National Security Marvin Dames urged young men who feel “emboldened” to exchange fire with trained officers to reconsider, as they would be doing so at their own peril.

During the mid-year budget debate, the minister recalled that a suspect who robbed a woman when she returned home celebrated by firing his gun in the air.

He said the act prompted police to respond.

But the man allegedly began shooting at the officers, who shot and killed him.

“We are in an era where some in our nation continue to defy authorities and to take on police officers as if they are acting out a scene in a movie,” Dames said.

“Mr Speaker, no one likes to see anyone shot and every shooting deserves a thorough investigation and wherever an officer is at fault, he or she must suffer the consequences.

“But Mr Speaker, I cannot say that if the duty of a police officer is to ensure that the law of this land is upheld, and he or she is confronted with misguided individuals who feel they are empowered to take on law enforcement with AK-47s and weapons of that kind — to take on trained individuals who are sworn to protect us — then they are doing it at their own peril.

“So, I send a warning out in particular to those young men who feel so emboldened that by carrying a handgun or an assault rifle puts them on top of the world, please, please reconsider and rethink, and think before you act because you will not succeed.”

Dames said despite one of the most challenging terms in the nation’s history, namely due to the deadly Hurricane Dorian and the global coronavirus pandemic, crime has trended downward overall over the last four years under the Minnis administration.

“Not only does this mean that we are on to something or on the right track, [but] it also means our four-pronged approach of conceptual leadership, technical investment in technology, complemented by professional development to support the same, and good governance, undergirded with fiscal responsibility and integrity, are indeed working,” Dames said.

Crime was down overall 16 percent last year compared to the year before.

However, rape increased by eight or 16 percent — 43 reported incidents compared to 50.

The minister said authorities will place emphasis on rapes, which remains of “great concern to all of us”.

Dames said while it is not time to celebrate, it cannot be denied that the downward trend in crime is in part due to good government policies combined with effective strategies executed by officers.

He said despite the trend, “there will be peaks” and the government and law enforcement will have to find the answers to those challenges.

The minister also announced that the sex offender’s registry will soon be introduced.

“A lot of working is now taking place behind the scenes to make that a reality,” he said.

“This registry will impose reporting obligations on sex offenders, so this will help us at reducing the high incidence of rape, especially in our country, thereby providing the police and the Bahamas Department of Corrections with up-to-date information to reduce reoffending, by providing notifications of residents, conviction, locations, photo identification and alias to the public.”

A pilot program of the sex offender’s registry is expected to be launched this quarter.

Dames also said of the 200 body-worn cameras the police force acquired, 120 have been rolled out in mobile patrol, flying squad and rapid response.

He said the remaining 80 body-worn cameras were awaiting upgrades.

He said 18 dash cameras have been deployed, while the remaining dash cameras will be installing following upgrades to police vehicles.

To date, over 4,000 recordings have been captured using dash cameras.

He said the investment in technology has been worth every dollar.