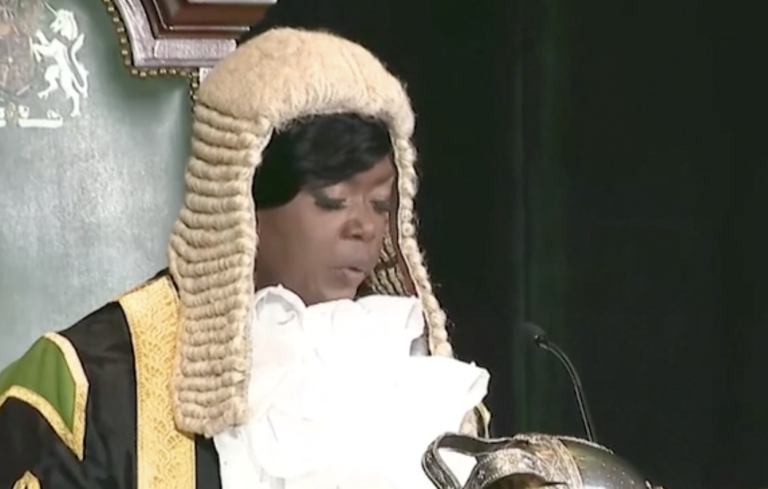 NASSAU, BAHAMAS — Two women will simultaneously preside over both Parliamentary chambers for the first time in Bahamian history.

During the official Opening of Parliament at Baha Mar yesterday, Bamboo Town MP Patricia Deveaux was elected as the 55th speaker of the House of Assembly, and Senator Lashell Adderley was appointed as president of the Upper Chamber.

While multiple women have previously headed the Senate, this will only be the second female house speaker, after Rome Italia Johnson who held the position in 1997.

Englerston MP Glenys Hanna-Martin, the longest-serving woman parliamentarian in the history of The Bahamas, made the motion for Deveaux’s appointment and Elizabeth MP Jobeth Coleby-Davis seconded the nomination.

Hanna-Martin said the historic representation shows that it is truly “a new day” and women are willing and ready to participate as full citizens in the affairs of the country.

She noted that while tremendous advances have been made, women continue to be underrepresented in Parliament despite making up half the population and more than half the electorate.

“It is vital therefore to our children’s future and the fret of our nation fro generation unborn that the voices of women be heard in this House and for our energies, insights, and instincts for our patriotic love to be seen and felt and made manifest in the forward progress of our people.”

Hanna-Martin added that she is confident Deveaux will provide sound, stellar and fair leadership over the parliamentary proceedings and urge other members to support her.

Yesterday, Deveaux accepted the appointment with a deep sense of humility and pledged to continue the tradition of dignity and honour that has marked the office. She insisted that the business of the House will be carried out with respect and in a fair and unbiased manner, and further underscored that all members will be treated equally.

“I will seek to prove myself worthy of my office,” Deveaux said. I will aim as high as I can to maintain decorum, respect, dignity, and fidelity in the proceedings of this honorable house.”

She urged and cautioned members not to abuse their privileges of freedom of speech.

“We cannot afford any slippage in any of those areas if we intend to advance the institution.”

Deveaux made her breakthrough in frontline politics last year when she dominated headlines after her use of an ethnic slur at a Progressive Liberal Party rally.

As she introduced now Minister of Health Michael Darville, she noted that the PLP is comprised of “nice-looking people” and not a “bunch of darkies all over the place, heating up the place”.

The comments made the rounds on social media with many expressing contempt at its prejudicial overtones.

She later apologized, indicating that she regretted the language used to introduce Darville, and did not intend to alienate and offend some members of her own race.

Meanwhile, Adderley also touted the historic occasion and promised to preside with impartiality, as she called on her colleagues to act with the dignity and respect the chamber deserves.

“This is the first time in the history of our commonwealth that two women have sat simultaneously as speaker of the House and president of the Senate,” she said.

“Indeed this is a seminal moment in our country and, again, it is noteworthy that perhaps during the most challenging times since independence we have turned to two women to keep order and to maintain order and transparency in our system of democracy.”