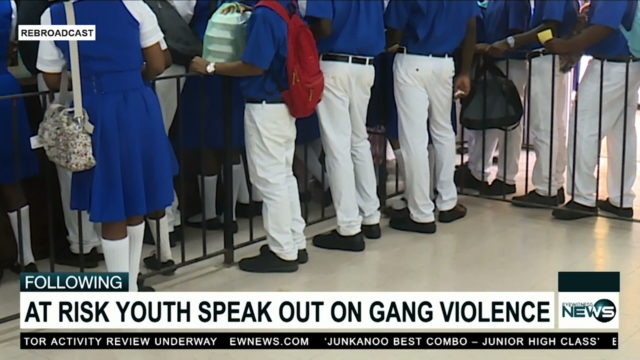 Hope Center founder: Where is the investment in keeping students out of prison?

NASSAU, BAHAMAS 0 “That could have been me,” a contemplative 16-year-old boy said as he recalled the murder of Perry Rolle, 15, a T.A. Thompson Junior High School student who was stabbed and killed by a student of another school on Pitt Road Tuesday.

The teenager said he knew Rolle.

Speaking to Eyewitness News Online on the condition of anonymity, the young man, who has been branded as an at-risk student, sat alongside six other young men, who were sent to the Hope Center, on Bahama Games Boulevard, for mentoring after being suspended from their respective schools.

Reinforcing concerns expressed by authorities and education officials about an ongoing gang feud playing out among some students of certain schools in the public system, the teenagers explained that although they feel safe while at school, once they leave those gates and begin to make their way home, they find themselves looking over their shoulders.

Of those who spoke, each explained that they have a preference to carry a weapon to protect themselves.

“Ninety per cent of us carry weapons, rather than talk to adults because adults won’t always be around,” the 16-year-old said.

“The people on the street; the guns that they have; the police don’t have.

“They have grenades. You think it’s a joke?

According to authorities, two students of C.C. Sweeting, ages 16 and 15, approached Rolle shortly after 3:00 p.m. on Tuesday as he was walking toward his Wilson Track Road home.

One of them reportedly handed a knife to the other with instructions to stab the T.A. Thompson student. He complied, stabbing Rolle several times about the body, including the chest.

Rolle died in hospital. The murder has sent shockwaves throughout the community and reignited calls for increased measures to protect children and for parents/guardians to have a more active role with their children.

“He was a good kid you know,” Todd said.

“A lot of these kids leave here positive, but then get thrown back into the same communities and they have to deal with the same circumstances.”

Explaining that gang members often lie in wait in certain areas to target rival students, Hope Center Founder Pastor Carlos Reid said, “There should be laws that say if you’re not in school and you’re in this school zone during a certain time frame, [you’re] getting locked up.

“They know where these schools are sometimes around 3:00 p.m.

“These boys wait on the road right there, waiting for these boys too mess with them.”

Todd also said a lot of young men feel isolated in the absence of parents or teachers connecting with them.

“Mentoring is a serious thing because these kids don’t trust certain people,” he said. “They are going to go to people they trust.”

Reid, who has overseen the Hope Center for over 25 years, has sustained a persistent fight to end gang violence in schools.

He said the community-outreach and youth intervention organization is not government funded.

“There should not be a school that we are not being funded to go into right now,” Reid said.

“How much money does America put into their war with Iraq?

“We know we have a gang problem in our school, we know that.

“Well, we have a war in our country, and its gangs.

“… Instead, we will wait to them cut a movie, until we react.

“Where is the investment to make sure they don’t go in jail?”