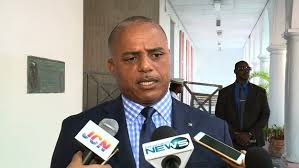 The destruction of Abaco police stations resulted in the loss of $473,940 worth of equipment, he said.

As for Defence Force, Dames said losses in Abaco stood at $17,400.00, including damages to its residences and the operational centre.

In Grand Bahama, the first floor of police headquarters at the Gerald Bartlett Complex experienced flooding which resulted in loss of vehicles and equipment totaling $296,790.00.

“Flooding in Grand Bahama resulted in the loss of $1,480,436 worth of communication equipment that was destroyed or damaged in High Rock and West End stations; the police canteen; training college; and control room, respectively.

The McClean’s Town and Bassett Cove, High Rock stations were completely destroyed, and $179,000 worth of communication equipment was lost.

“Approximately $238,000 worth of police furniture was destroyed,” Dames continued.  “There was a total of 69 police vehicles damaged by flooding while parked at Police Headquarters and/or the Albert Miller Complex (Northeastern Division and Fire Services) in Freeport at a cost of $1,690,500.

Agencies under the remit of National Security in Grand Bahama experienced $4,217,716 worth of damages, he said.

“The Defence Force loss reflected three vehicles and so did the Parliamentary Registration Department,” Dames said.