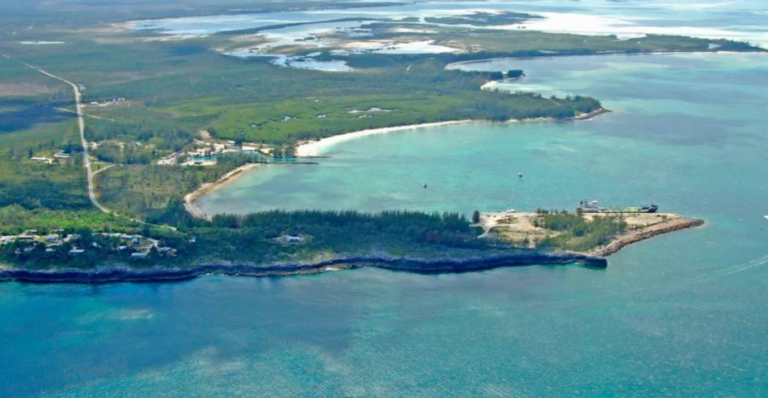 An aerial photo of Andros, Bahamas.

NASSAU, BAHAMAS – A proposed multi-million dollar project that would require aragonite mining in Morgan’s Bluff, Andros, has been opposed by some Androsians and environmentalists.

Environmentalist Prescott Smith said he has requested a meeting with the North Andros Local Government Council to speak on the matter of why the project should not be approved.

Scott said he is not trying to hinder growth, but it should not be done by “exploiting others”.

According to the document, which was submitted last September, the North Andros Green Free Trade Zone project would be modeled after the 1955 Hawksbill Creek Agreement – which gives the Grand Bahama Port Authority responsible for the development, administration, and management in the Port Area.

The project proposes the development of an air-sea manufacturing/commercial park; a 10,000-foot international runway and terminal, with police, customs, emergency services, and immigration; and a deep water international port, also with law enforcement.

It would also include a medical research center with a clinic; an eco-tourism destination including cruise ship berths, hotel, village, restaurants, beach; and an Economic Center with retail, commercial and residential lots.

However, a critical part of the project would include the processing and manufacturing of limestone from the development and aragonite harvesting from the Joulter Cays Sand Bank area.

The aggregate mining and aragonite harvesting would take place in Phase 1 of the infrastructure development of the project in order to process raw materials to aid in the construction.

“Aggregate from the Port Development and Industrial Canal real estate to be manufactured to ASTM standards and used for concrete, asphalt, and construction of the infrastructure along with being exported,” the proposal notes.

“Aragonite from the Joulters Cay area to be environmentally harvested and used for concrete, asphalt and construction of the infrastructure. Further processing of the aragonite for the manufacturing of cement and lime.

“Both the aggregate and aragonite are critical in the process of developing the infrastructure at a reasonable cost, creating Bahamian employment and alleviating the need for foreign imports.”

The remaining area – some 250,000 acres, would be part of the development project of which 75,000 acres would be developed “by others”.

It further outlines promises and concessions the developer would be willing to make – including paying royalties to the government for mined raw aragonite at $2 per dry short tonne and 50 cents for per short tonne for limestone mined from the port development.

It also conceded to share with the government “any financial gain derived via carbon credits for the responsible harvesting of the aragonite mineral, green power generation, or any other carbon-sequestering processes.”

The proposal was submitted to the government in September last year.

Aragonite mining in The Bahamas has been a longstanding controversial and high debated topic, as many believe it can reap significant benefits from the country’s natural resources.

However, in Parliament on Monday, Environment Minister Romauld Ferreira noted that while the aragonite resources in the country are vast, the material is not produced continuously and takes longer to recover.

“Any potential mining area, once stropped of aragonite will take hundreds if not thousands of years to recover,” he said.

“Ocean Cay where mining occurred for 40 years shows no sign of recovery.

“This is why the government placed a moratorium on aragonite mining to better understand the process.”

But Scott on Thursday disagreed. He called Ferriera’s suggestion that Bahamians will not see the mining of aragonite in this lifetime, a smokescreen.

He insisted that while officials are indicating that aragonite has no significant dollar value to the country, it currently only benefits a few.

Scott added that the country’s natural resources – including  calcium carbonate, limestone, aragonite, and other minerals – are produced “24 hours a day, you just have to know where to extract it from”.

Ferriera has advised that the Ministry of Environment submitted a Mining Policy and draft legislation to the Office of the Attorney General for review.

why cant the government take on this project so it benefits the Bahamas? sort of “by Bahamians for Bahamians”

we should never allow another country to mine our resources.. They will only rape the economy as they will not be completely honest with all that they are really doing. We should mine our own resources… we can have foreigners as “consultants” if need be