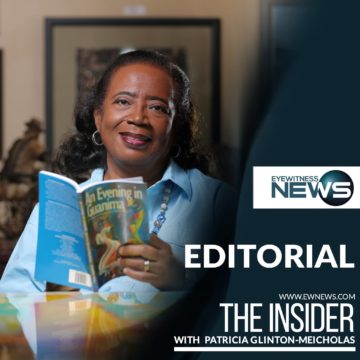 My family on both sides were out island people—Long Island, Eleuthera and Cat Island. The island I got to know best was the latter. My maternal grandfather, George T. Smith, an Eleuthera man and a headmaster, was posted at Port Howe, Cat Island for 17 years. Over time, my elder sister and I would be sent to stay with them, freeing my parents to strive for an economic toehold in Nassau, where the greater part of the Bahamas’ economic activity occurred.

Sustaining life in the teacher’s residence and other homes in the settlement was challenging at all times, but the people succeeded at it. For one thing, with superb generational wisdom, they grew most of their own food. How they did it provides an excellent lesson for achieving a healthy population and building a stable economy with excellent growth potential.

To begin their food production cycle, the farmer had to clear land. Having no mechanized earthmovers, they used the instruments that were readily available to them—machetes, axes and hoes. They used, slash and burn, a clearance method that was passed down through the ages, since our nomadic hunter/gather ancestors settled down and made permanent homes and villages.

By intuition and observation, newly domesticated peoples came to realize that the burning of plant material left behind a nutrient-rich layer, which provided fertilizer to spur the growth of the planted crops.

Our ancestors also realized that some plants have a great and productive friendship. Corn and pigeon peas planted in the same hole do wonders for each other. Farmers in The Bahamas and elsewhere learned that some plant species do best in specialized environments. Pineapples flourish in the red soils that are carried on the winds from West Africa to our islands. They came to value “bottom land”, solution holes where natural process deposited leaves and other dead vegetation that made generous mulch that fed perfectly the heavy-feeding banana. Farmers learned that crop rotation is necessary to preserve soil fertility for as long as possible.

In the same way, farmers came to realize that some good things, no matter how profitable in the beginning can do a disservice. What is initially beneficial can become harmful, if one does not change course. They realized that fields resulting from slash and burn agriculture become exhausted over time, so they moved on to fresh areas to create new fields. Nowadays, farmers are realizing that slash and burn has been destroying native forests that have essential roles to play in communities—preventing soil from washing away, especially in preventing flooding and soil erosion from hill and mountainsides, as our neighbour Haiti has learned to its sad cost.

What lessons can we take from the farmer to apply to growing an economy to feed ourselves and our national and personal aspirations? Many.

Ground clearing. Slash and burn agriculture was once the norm for Bahamian out island farmers. They made the best of the knowledge and equipment they possessed at the time. Nowadays, to grow anything of worth, including national economies, we now know that indiscriminate “slash and burn” has serious drawbacks. Yet, Bahamian politicians, from one party and administration to the next, seem married to the method of ‘scorched earth’.

When there is a change of administration, ministerial appointments are made and permanent secretaries and various administrators are shuffled, seemingly with little consideration of the appointees’ aptitude for the post, which tends to lead to a waste of talent, time and money that is near criminal.

Shouldn’t the political farmer learn the lesson that people, like plants, by their nature, have varying characters and some possess special and invaluable abilities? If they are also endowed with great maturity, such servants will lend their talents to advantage wherever they are planted, no matter their politics. Placing an appointee in the right “soil” or environment can result in luxuriant growth, like rooting pineapple slips in red soil and onions and peanuts in sandy soil. It is also useful to know that wonderful starchy tubers, such as yams and cassava, can flourish in the rockiest, most forbidding environments.

By the same token, there are some plants that hinder rather than help growth. In the plant world we have the example of the exotic Brazilian pepper and casuarina, which do their best to dominate and destroy all around them. In the political world, isn’t it much the same in the fields of politics and government? There are those whose partisan tenets call for obfuscating and destroying when the party that assumes power is not the one with which they are affiliated. Their modi operandi tend to be childlike; if I can’t have it my way, I try my best to ruin the game, with no thought given to preserving or furthering the national or the common good. Such plants merit consignment to a place where they cannot cross-pollinate those who answer to a higher call—service above selfish motives.

The takeaway here? It is that it is vital to first examine the territory to which we are staking claim, learn which plants are beneficial, learn the environments and what nutrients will cause each to put out their best foliage and most glorious fruit and place them there. Never mind that the plant may have been an inadvertent gift from the person who lost the property through foreclosure and proclaim loud and long to the press and anyone who listen that the fruit is theirs, no matter that the inheritor added a timely fertilizer.

In the world of governments, foreclosure is loss of an election, which is, understandably, a bitter pill to swallow. But to right-minded people, there is a spoonful of sugar that can “help the medicine go down”—love of country and desire to see it grow beneficially.

On the other hand, the sad fact is that some plants are inherently venomous and, given the chance will poison all around them. Wonderful plants, assailed by age, bugs or becoming root-bound, can also encumber the vital ground. On the farm they can be uprooted and serve as animal fodder. In the fields of human endeavour, isn’t it kindest to bid them fond, respectful farewell and generous pensions and the assurance that their valorous deeds will shine bright in the annals of our history?

Now about changing course in economic terms. Shouldn’t we accept that what worked in the past may have become passé and counterproductive with time. Consider that the Stafford Sands’ model of tourism worked to give Bahamians year-round income. Exclusive, Las Vegas-style hugeness worked for a while; it matched the post-war mentality of people who had been starved, in some cases of the basics of life. However, the infallible formula for success in the commercial world is to match product to the needs and wants of the potential buyer. Today, a great sector of the marketplace crave authenticity, so why isn’t The Bahamas doing more to build up its heritage and culture sector? Aren’t these the very assets that will lend us the essential destination distinction, giving us an undeniable place in an increasingly overcrowded tourism marketplace?

Holding on to the behaviours—that no longer serve positive growth—the same goes for just about every aspect of government administration. While the very originators have abandoned them, we Bahamians cling with tooth and claw to British laws, precedence and colonial administration, based on metropolitan hierarchies and a determination to control, which have little validity in a modern democracy. Yet, some of us hold tight to wig and gown, lest the winds of necessary change blow them away as well they should be.

“A thing is right if it tends to preserve the beauty, integrity and stability of the biotic community; it is wrong when it tends otherwise.” —Aldo Leopold, “The Land Ethic,” A Sand County Almanac.