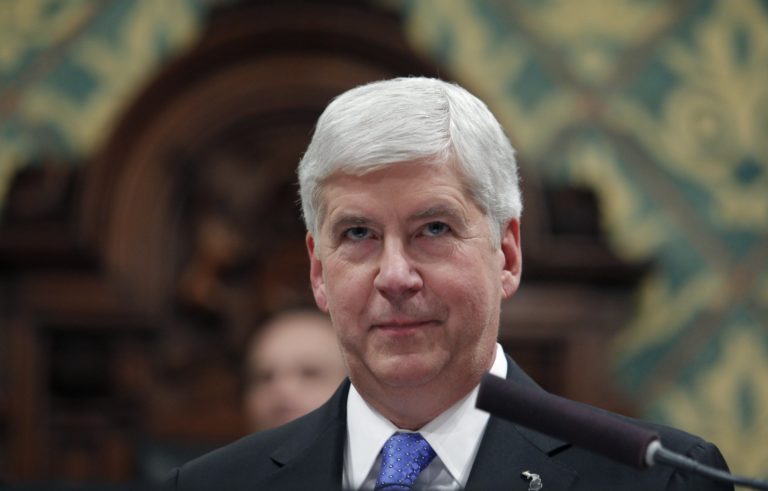 In this Tuesday, Jan. 23, 2018, file photo, Michigan Gov. Rick Snyder delivers his State of the State address to a joint session of the House and Senate at the state Capitol in Lansing, Mich. Authorities investigating Flint's water crisis have seized from storage the state-owned mobile devices of Snyder and 65 other current or former officials. Documents obtained through a public records request show search warrants were sought two weeks ago by the attorney general's office and signed by a Flint judge. (AP Photo/Al Goldis, File)

Authorities investigating Flint’s water crisis have used search warrants to seize from storage the state-owned mobile devices of former Gov. Rick Snyder and 65 other current or former officials, The Associated Press has learned.

The warrants were sought two weeks ago by the attorney general’s office and signed by a Flint judge, according to documents the AP obtained through public records requests.

Solicitor General Fadwa Hammoud and Wayne County Prosecutor Kym Worthy, who is helping with the probe, confirmed they executed a series of search warrants related to the criminal investigation of Flint’s lead-contaminated water in 2014-15 and a deadly outbreak of Legionnaires’ disease.

The water crisis in Flint was one of the worst man-made environmental disasters in U.S. history. Untreated water leached lead from pipes and into Flint’s homes and businesses while cost-cutting financial managers — appointed by Snyder — were running the city.

The investigation has led to charges against 15 current or former government officials, including two who served in the Cabinet of Snyder, a Republican who left office in December. But no one is behind bars, and some Flint residents believe key players who could have prevented the lead debacle are getting off easy.

“As stated in recent motions, the prosecution is aware of substantial potential evidence that was not provided to the original prosecution team from the onset of the investigation,” Hammoud said in a statement Monday following the AP’s reporting. “The team is currently in the process of obtaining this evidence through a variety of means, including search warrants. The team is also conducting a thorough review of existing and newly received evidence pertaining to the Flint water crisis.”

One warrant, signed May 19, lists all content from Snyder’s state-issued cellphone, iPad and computer hard drive. Similar information was sought from the devices of 33 employees who worked in his office, 11 in the Department of Environmental Quality and 22 in the Department of Health and Human Services.

The evidence was apparently initially obtained by former special prosecutor Todd Flood with investigative subpoenas. Because it has been kept in a division of the attorney general’s office, Hammoud took the unusual step of securing a warrant to search another part of the office. She has been managing the probe since January.

“We’re doing everything we can to comply,” said Dan Olsen, a spokesman for Democratic Attorney General Dana Nessel, who is not involved in the criminal investigation and is instead handling lawsuits against the state by Flint residents. After succeeding former Republican Attorney General Bill Schuette this year, she appointed Hammoud to lead the probe.

A similar warrant was also issued to the Department of Technology, Management and Budget.

The warrants seek data from the devices of individuals who have been charged in the probe but also uncharged officials such as Snyder, former Environmental Quality director Dan Wyant and various people who worked in Snyder’s office including former Lt. Gov. Brian Calley, top aide Richard Baird and chief of staff Dick Posthumus.

Snyder attorney Brian Lennon declined to comment on the warrants Monday, saying they are part of ongoing litigation.

The warrants came after Hammoud this year reported that boxes of records were discovered in the basement of a state building, including phone extractions and a “trove” of other materials stored on hard drives that allegedly had not been turned over in response to the subpoenas. She sought long breaks in the criminal cases to look at the boxes and any other evidence, but judges declined to suspend the cases for six months.

Flood was ousted as special prosecutor in April after leading the three-year investigation. Nobody in Snyder’s office has been charged.

Hammoud accused Flood of mishandling the production of records and other evidence collected from state agencies. He has defended his work, saying he acted professionally.

Separately, another lawyer from the attorney general’s office appeared in court to speak up for attorneys in the department who had assisted Flood in collecting and cataloging mounds of records. Christina Grossi said there was no wrongdoing by staff.

Under Michigan law, the affidavit that Hammoud submitted to get the warrants signed by Judge Nathaniel Perry III will not become public for 56 days, though prosecutors can seek to suppress it longer.

The AP filed Freedom of Information Act requests with the attorney general’s office and the budget department to see the warrants they received.