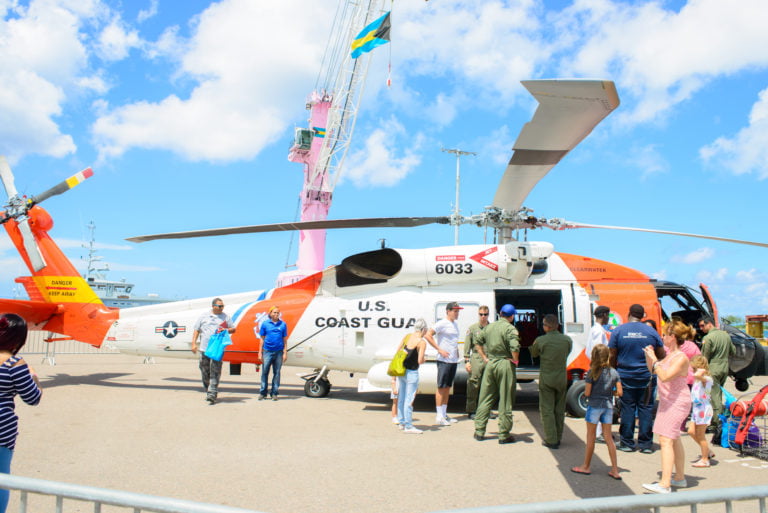 Maritime Festival attendees line up to board a helicopter on display courtesy of the United States Coast Guard and OPBAT.

NASSAU, BAHAMAS – Arawak Port Development Limited marked its 10thanniversary by hosting The Bahamas’ first ever Maritime Festival on Saturday, May 11 at the Nassau Container Port.

The day-long event attracted thousands of attendees and featured exhibits and demonstrations by various maritime stakeholders.

According to Mike Maura Jr., APD President and CEO, the festival was a resounding success that exceeded the expectations of organizers and participants alike. The festival also served as an eye-opener for many.

“Throughout the day I’ve had the opportunity to talk with people about their experience here. And even folks who work at APD every single day have said that they haven’t realized how interconnected our maritime industry is and how we all have to come together every single day to make things work efficiently, safely and in the right way at the Nassau Container Port,” said Maura. “So it’s been a phenomenal experience for everyone that has participated. And I’m so excited and so thrilled. The festival has actually exceeded our expectations.”

Maura noted that it was important to showcase maritime partners because a commercial port operation like APD represents an interdependent maritime and trade community. APD’s decade-long success has been “greatly dependent” on partnerships with organizations like Bahamas Customs, the Department of Environmental Health, Department of Agriculture, national security agencies, various shipping companies, stevedoring companies, trucking community and terminal operators—many of whom were present at the festival.

Throughout the day, festival attendees went on bus tours of the Nassau Container Port and toured vessels of the Royal Bahamas Defence Force and the Royal Bahamas Police Force’s Marine Unit. Attendees were able to climb on board a helicopter, courtesy of the United States Coast Guard and OPBAT, and watch as it took off later in the afternoon.

The event also featured non-stop entertainment by beloved performers like Willis & The Illest band, Lady E, Rumpapumpum, and Ira Storr & The Spank Band, as well as younger acts like the Gerald Cash Rake N Scrape Band and Thrive 2 XL Band. Allan ‘Pacino’ Wallace and Stefan ‘Legend’ Davis completed live paintings on stage. The Royal Bahamas Defence Force Band was also on hand to entertain the crowd during the afternoon, while the Cacique-award winning Junkanoo Commandos group closed the festival day at around 10 pm.

As APD looks forward to helping to build the future of The Bahamas’ maritime industry, Maura hopes that the first ever Maritime Festival has sparked the interest and curiousity of Bahamian youth.

Said Maura: “We had so many young Bahamian boys and girls that came out. Whether they were boarding a Royal Bahamas Defence Force vessel or sitting in the pilot seat of a US Coast Guard chopper that goes up and down our Bahamas every single day or boarding a Royal Bahamas Police Force vessel, the fact is, we were probably planting a little seed in each of them that asks the question, ‘is maritime for me?’ That is so exciting to me. And I know that we have some pilots—both marine and air pilots—on the horizon.”