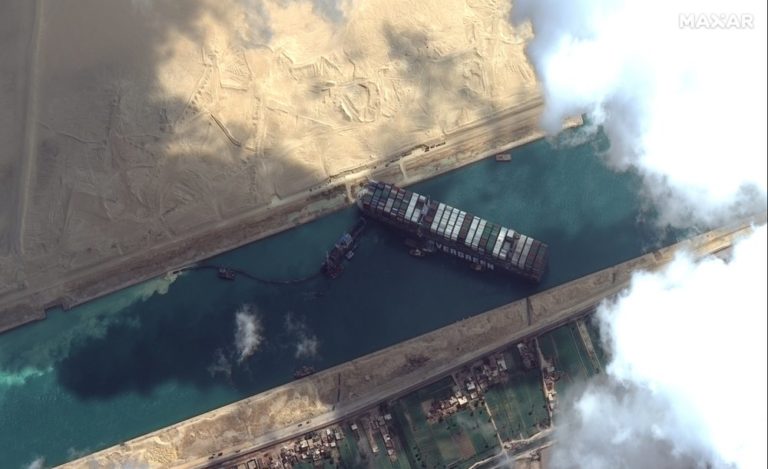 This satellite image from Maxar Technologies shows the cargo ship MV Ever Given stuck in the Suez Canal near Suez, Egypt, Friday, March 26, 2021. (©MAXAR TECHNOLOGIES VIA AP)

NASSAU, BAHAMAS — Arawak Port Development’s (APD) top executive said he could not dismiss the possibility that some negative impact of the Suez Canal mishap could be felt locally.

Dion Bethell, ADP’s chief executive, told Eyewitness News: “I’m not certain of which route MSC uses in terms of bringing in their cargo here because they have many shipping lanes and could send it through another lane but I’m not dismissing the possibility that there could be some negative impact.”

Bethell added: “About 90 to 95 percent of cargo comes from the US, Canada and South America. The percentage is small but it could have some impact on us on the international cargo side.”

The Ever Given, a cargo ship nearly quarter of a mile long and weighing some 200,000 metric tons, has been stuck since last Tuesday in the Suez Canal, one of the world’s busiest trade routes.

As a result, more than 300 ships are stuck on either side of the blockage, with some vessels having had to reroute around Africa. Just over 10 percent of global trade passes through the canal, which connects the Mediterranean Sea to the Red Sea and provides the shortest sea link between Asia and Europe.

Bethell acknowledged that in recent months there has been an increase in shipping rates for firms sourcing goods out of China.

“We haven’t gone up on any of our rates but there seems to be some shortage as a result of COVID on the shipping equipment, the containers themselves in terms of them being in the rotation,” said Bethell.

“Part of that may have resulted some rates out of China going up. Again, the percentage impact on us is very small because 90 to 95 percent of our stuff comes though the US, Canada and South America.”

Bethell noted that the BISX-listed port operator was still not at its pre-COVID levels in terms of import volumes.

“In the next few months, if the occupancy at the hotels increase, hopefully we should start to get to those pre-COVID levels,” said Bethell.

“With the lower occupancy levels, many of the resorts are not ordering supplies at the levels they would have.”