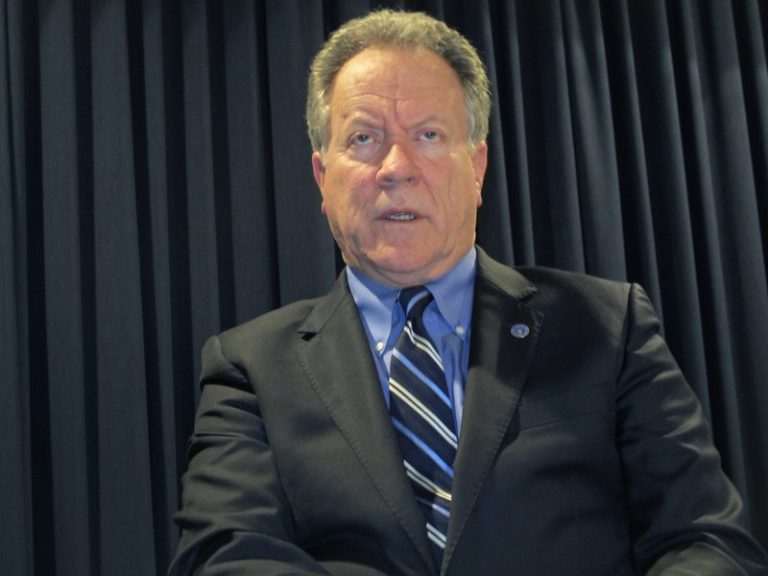 World Food Program executive director David Beasley talks during an interview at the Department of Foreign Affairs and Trade in Canberra, Australia, Monday, March 26, 2018. Beasley says the collapse of the Islamic State movement’s self-described caliphate across Syria and Iraq has led to extremists mounting a recruitment drive in sub-Sahara Africa which threatens to trigger a new European migrant crisis. (AP Photo/Rod McGuirk)

CANBERRA, Australia (AP) — The head of the United Nations food agency warned Monday that the relocation of Islamic State group members from the Middle East to Africa could trigger a massive new European migrant crisis.

David Beasley, executive director of the World Food Program, said many of the militants who fled Syria amid the collapse of the Islamic State group’s self-described caliphate had ended up in the greater Sahel region, a belt of semi-arid land spanning east-west across Africa and home to 500 million people.

Islamic State militants are now collaborating with other extremist groups, including al-Qaida, al-Shabab and Boko Haram, to create “extraordinary difficulties” across the Sahel, Beasley said in an interview with The Associated Press.

He said he has warned European leaders that they could face a far larger migrant crisis from the Sahel than the Syrian conflict generated if they do not help provide the region with food and stability.

“You’re talking about the greater Sahel region of 500 million people, so the Syria crisis could be like a drop in the bucket compared to what’s coming your way,” Beasley said he told them.

“What they’re now doing is coming into an already fragile area, a very destabilized area because of climate impact and governance, and they’re infiltrating, recruiting, using food as a weapon of recruitment to destabilize so that they can have mass migration into Europe,” he said.

“Mother after mother will tell you that ‘My husband did not want to join ISIS or al-Qaida, but we had no food,’ and if you haven’t fed your little girl or little boy in two weeks and the alternative is signing up with ISIS, you sign up,” Beasley added, referring to the group, also known as Islamic State of Iraq and Syria.

The World Food Program wants to provide stability, economic growth and sustainable development as well as food to the region, said Beasley, who was in Australia for talks with the government on funding strategies.

The Sahel — which includes Burkina Faso, Chad, Niger, Mali and Mauritania — is vulnerable to droughts and floods and faces constant food insecurity.

Five nations have also been grappling with a growing menace from extremists, including groups linked to al-Qaida’s North Africa branch.

In February 2017, the so-called “Group of Five” agreed to assemble a 5,000-strong force to combat extremist groups, organized crime and human trafficking.

U.N. experts monitoring the implementation of sanctions on Mali warned this month that the conflict-wracked West African nation and its neighbors “face intensified terrorist threats,” especially in the border area between Burkina Faso, Mali and Niger.

The experts’ interim report said the militant group calling itself the official al-Qaida branch in Mali and the Islamic State in the Greater Sahara extremist group have declared that “jihadist groups are working together” to fight the 5,000 troops.

In January, the U.N. Security Council threatened sanctions against parties in Mali who obstruct or delay the full implementation of the peace deal agreed to by Mali’s government, Tuareg separatists and armed groups.

The experts concluded after their Mali visit in February that “all parties to the agreement are responsible for delays.”

Mali has been in turmoil since a 2012 uprising prompted mutinous soldiers to overthrow the country’s president. The power vacuum that was created ultimately led to an Islamic insurgency and a French-led war that ousted the jihadists from power in 2013. But insurgents remain active in the region.

The U.N. panel said “insecurity continues to rage and is now shifting increasingly toward the center of the country” from the north.

Across the country, it said, “an estimated 4.1 million people are in need of humanitarian assistance.”

The experts said the extremist group Jama Nusrat Ul-Islam wa Al-Muslimin, which positioned itself as the al-Qaida branch in Mali, and Islamic State in the Greater Sahara have claimed attacks not only in Mali but in Niger, in the Tahoua and Tillaberi regions.

In Burkina Faso, the experts said, “the terrorist group Ansar Al-Islam has multiplied attacks in the last months against the government, including two attacks against Burkinabe security forces in Soum province on Dec. 2 and Dec. 21.”

Beasley told the Security Council last week that the number of people around the world in danger of dying unless they get food urgently surged to 124 million last year — mainly because “people won’t stop shooting at each other.”

Globally, Beasley said, 60 percent of the 815 million chronically hungry people who don’t know where their next meal is coming from live in conflict areas.