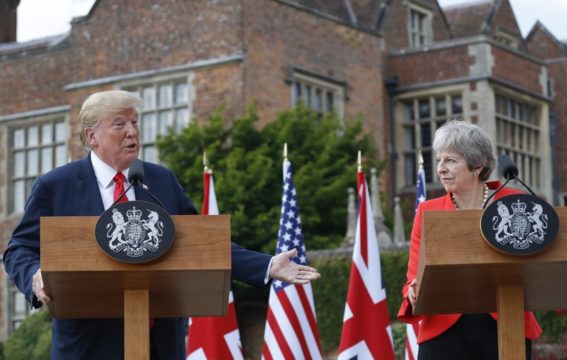 LONDON (AP) — There’s a character called Don Logan, played by Ben Kingsley in the British film “Sexy Beast” — a bullying and mercurial individual who wreaks havoc on the life of a retired former underworld cohort he visits in Spain. He intimidates, humiliates, taunts and worse. He is a most unwelcome house guest.

For many Britons, the role of Don Logan was played Friday by U.S. President Donald Trump.

The U.K. awoke to the visiting Trump’s fusillade against the country. He criticized its prime minister’s EU exit strategy and its immigration policy. He personally attacked London Mayor Sadiq Khan — effectively blaming him directly for terror attacks in the capital city.

That has left many here feeling a lot like Logan’s host as they roll out the red carpet to a world leader seemingly intent on denigrating their nation.

Tens of thousands already were expected to protest Trump’s visit. The president’s remarks to The Sun newspaper, which emerged as British Prime Minister Theresa May was hosting him at an opulent black-tie dinner on Thursday night, could swell the crowd amassing in London on Friday.

He doesn’t seem to admire the current British leader a great deal, based on the interview he gave to Britain’s biggest selling tabloid at the end of a chaotic NATO summit in Brussels.

Trump accused May of ruining what her country stands to gain from the Brexit vote to leave the European Union and said her “soft” blueprint for the U.K.’s future dealings with the EU would probably “kill” any future trade deals with the United States.

Though White House press secretary Sarah Huckabee Sanders was quick to issue a statement saying Trump “likes and respects Prime Minister May very much,” the prime minister, already on a back foot, needed his intervention as much as losing a vote of confidence in Parliament.

The president came down firmly on the side of the Brexiteers, those seeking a hard split from the European Union. He said Boris Johnson, May’s now ex-foreign secretary, “would be a great prime minister. I think he’s got what it takes.”

To Britons, this will smack of direct interference in their internal affairs — something this proud island nation is loath to tolerate.

Despite their differences with May, even members of the British opposition party stepped up to defend the prime minister.

“She is his host,” Thornberry said of the unvarnished opinions Trump shared with The Sun. “What did his mother teach him? This is not the way you behave.”

Britain, not unlike the United States, is a country with a strong immigrant presence built over the last century. While the country’s multiculturalism has been praised, it also has been used by the right as a divisive tool and provoked political tensions. Trump’s views on immigration may be applauded by some in Britain, but they have appalled many others.

It was London Mayor Khan himself who gave the go-ahead for the “Trump baby” giant balloon, which portrays the U.S. leader as an angry infant in a diaper with a mobile phone in his hand, to be flown over Parliament Square in London on Friday.

It seems to have infuriated Trump.

“I guess when they put out blimps to make me feel unwelcome, no reason for me to go to London,” he said.

“I shouldn’t be the arbiter, as a politician, of what’s in good taste or bad taste. What’s important is it to be peaceful and for it to be safe,” he said.

Two days ago, England was beside itself with excitement at the prospect of reaching the final of soccer’s World Cup for the first time in 52 years, celebrating in the sustained sunshine — a rarity for a country often associated with granite skies and rain.

It wasn’t to be. And as the feel-good factor fades, Trump’s barbed words are likely to provide a focus for British anger toward their house guest.

This article was written by TAMER FAKAHANY, Associated Press writer.