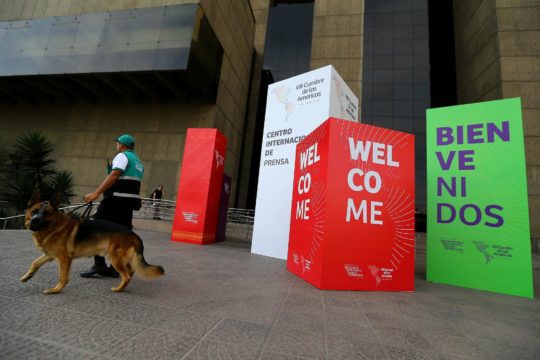 The venue for the eighth Summit of the Americas, which begins on Friday in Lima, Peru. (Photo credit: IvanAlvarado/Reuters)

Washington — Although perhaps justified by the tragic events in Syria, President Trump’s last-minute decision to skip the eighth Summit of the Americas, which begins this week in Lima, Peru, was discouraging to his Latin American and Caribbean counterparts. Most probably see it as confirmation of his continuing indifference to the region. His aggressive rhetoric and erratic policies have already roiled inter-American relationsand left the hemisphere’s leaders disconcerted.

Several White House decisions have been criticized as openly hostile to Latin America, including the ordering of National Guard troops to the Mexican border and the undoing of programs that now shield millions of immigrants from deportation. Particularly unnerving has been the president’s obsession with erecting a wall along the border. Also resented are the Trump administration’s threat to unilaterally rewrite international trade rules, levy protectionist tariffs and possibly scrap the 25-year-old North American Free Trade Agreement.

Washington’s moves to revive the futile “war on drugs” are unwelcome. So is the renewed hard-line approach to Cuba, reversing much of President Barack Obama’s opening, which was heralded throughout the region and brought Raúl Castro to his first summit meeting three years ago. He is expected in Lima as well.

With few encouraging gestures or initiatives from the White House, it is no surprise that Gallup reports only 16 percent of Latin Americans approve of Trump, a fraction of Mr. Obama’s 62 percent first-year approval.

Further muddying the waters are the alarms raised by senior United States officials about China’s expanding role in the region, which have stirred unpleasant memories of a long-past era when Washington considered Latin America its “backyard.” Many in the region wonder whether the administration’s new, more hawkish foreign policy team might resurrect the Monroe Doctrine, again giving the United States self-appointed authority to intrude on the region’s sovereignty.

Washington is already insisting that Latin America make the United States its “partner of choice,” while simply ignoring that the region’s economic and diplomatic ties are already globally diversified and China, not the United States, is South America’s largest trading partner. Pursuing this path will be offensive even to such leaders as Argentina’s Mauricio Macri and Chile’s Sebastian Piñera, successful entrepreneurs and now presidents.

Still, despite the shared confusion and distrust about United States policies and intentions, nearly all Latin American governments have chosen a pragmatic approach to dealing with Washington, seeking to accommodate Trump’s idiosyncrasies without caving in to his often exaggerated demands. They are not ready to risk an open breach and potentially lose the United States’ huge, profitable market and access to its trade, investment and technology. But Mr. Trump’s failure to show up in Lima will leave the region less secure about the future of United States-Latin American relations. Yes, it is good news that Vice President Mike Pence will be there, but he is not the same as having Mr. Trump. The Latin American presidents want the opportunity to engage the president of the United States, as their predecessors have had at every summit meeting of the past quarter-century.

Mr. Trump’s absence has reduced expectations that the United States and Latin America can find a way to effectively address the one issue where some signs of common ground can be discerned: the disaster engulfing Venezuela. This crisis of unprecedented proportions has, albeit belatedly, become the concern of almost every nation in the Americas. It poses the most crucial test of the hemisphere’s capacity for join action, but so far it has produced only limited agreement. Mr. Trump’s off-handed suggestion last August of a “military option” was immediately rejected across the region.

The Lima gathering gives the hemisphere’s heads of state a rare opportunity to discuss face-to-face what it will take to develop a sustained regional effort, which no government could mount by itself, to press hard on the Venezuelan regime to alter its destructive economic and social policies and allow for a meaningful political opening. Urgent action is also required by the region’s nations to respond to the needs of an accelerating migration from Venezuela. In just the past two years, a million Venezuelans have fled their country. This is clearly no easy task, given the divisions among nations, the lack of United States-Latin American cooperation and Venezuela’s fractured opposition.

There were many reasons to have low expectations for the summit meeting. Mr. Trump’s absence was not among them until this week. It is hard to foresee another similar opportunity in the near future for the Western Hemisphere’s leaders to make even modest progress toward stemming further erosion in inter-American relations and, in the process, beginning to forge a concerted approach to halt Venezuela’s meltdown.

__
This article was written by Peter Hakim and Michael Shifter for the New York Times. Hakim is the president emeritus and a senior fellow at the Inter-American Dialogue, a Washington-based think tank on Western Hemisphere affairs.  Shifter is the organization’s president.