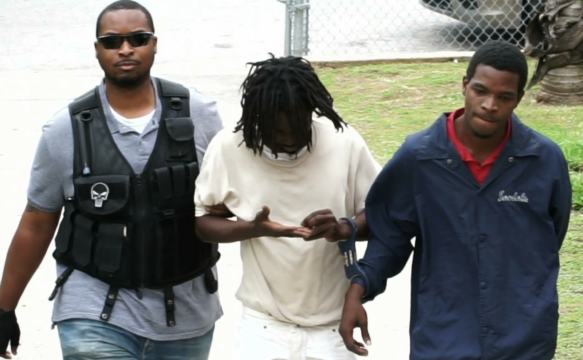 The man accused of raping a 10 year old girl was brought before a judge on Tuesday to face charges of rape and indecent assault.

Ricardo Burrows, 31, (far right in blue jacket) was charged with unlawful sexual intercourse with a 10-year-old between January 1 and February 2, 2018, as well as the indecent assault of another female.

According to court dockets, Burrows committed the second offense between January 1 and February 8, 2018.

It is alleged that the accused put his hand up the woman’s dress and touched her private part.

Burrows was not asked to plead and was denied bail.

He was remanded to the Bahamas Department of Corrections (BDOC) until August 9 at 10:00 a.m.

In other court news

Meanitme, another suspect is also behind bars for rape.

D’wayne Hinds was reported to have had unlawful sexual intercourse with a minor last week and was charged with indecent assault.

Hinds was not asked to plead and was remanded to BDOC until August 8.

Antonio Neilly, 24, and Dominic Stuart, 24, were both charged on possession of a hand gun while they robbed Travis Robinson.

Police reported that the two stole Robinson’s wallet containing $400 along with a cellphone on May 15.

Both Neilly and Stuart were not asked to enter a plea.

Stuart, however, was separately charged with attempted murder of Travis Robinson.

The two were remanded to BDOC until August 8.