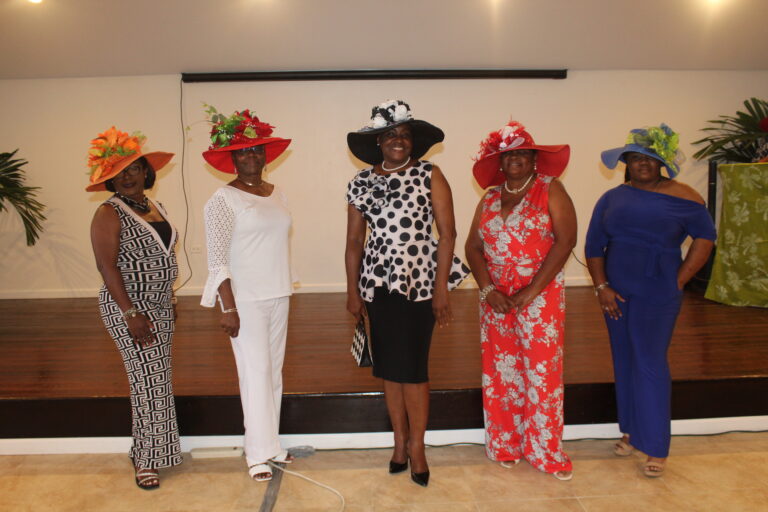 Bahamian designer Gertie O’Brien (center) and her beautiful models strike a pose while exhibiting just a few of many hat options at a hat show in 2021. (PHOTO: ASHLEY@SERENAWILLIAMS-PR.COM)

NASSAU, BAHAMAS — Bahamian designer Gertie O’Brien is exemplifying that “the show must go on” with the resumption of her highly anticipated fashion events. Following last year’s decrease in face-to face activities, O’Brien recently marked the start of her 2021 hat show season giving a ‘hats off’ to her dearest long-time supporters.

Bold colors, varied shapes, mixes, matches and more were sashayed by models as socially distanced guests imagined to which upcoming Sunday service, christening, funeral or even Kentucky Derby they would give the hats displayed the pleasure of being worn.

O’Brien knows first-hand that there is nothing like a room full of women adorned with unique hats. It was at a young age that her father counseled her that a woman should never enter the house of the Lord without her head covered. This message not only stuck with O’Brien, but also inspired her to envision and bring to life custom hats for her enjoyment and the delight of many others — especially her family, whose support she greatly appreciates.

“When you wear a hat, people look at you as a lady. The outfit is not complete without the hat,” said O’Brien.

She also gave some insight on how her weekly church outfits — which are admired by her priest especially — transpire.

“I prepare myself from Saturday. I go into my closet; I decide what I am going to wear and if I don’t have a hat to complement or enhance my outfit, I will design and make one — another gorgeous and fashionable addition to my range of Gertie’s Hats,” she said.

“And when I get to church, everyone is there waiting in great anticipation to see my outfit and of course the hat of the day that completes and enhances the look.”

Kimberley Bain, one of the show attendees who attends the same church as O’Brien, describes her as a “fashion show”.

“Since she’s been doing hats, I have been encouraged to wear them. Whenever I get a hat for me, I’m sure to get one for my mom as well so we can join the beautiful hats at church,” said Bain.

Attendees at the Red Cross hall where Gertie’s Hats debuted this year were thankful and happy for the event, noted O’Brien’s daughters, Nicole O’Brien and Nicara O’Brien-Adderley.

Gertie’s Hats officially came about in 2018 after O’Brien’s friend, Isabel Rattazzi, suggested she turn her passion and fashion talents into a business, explained Nicole.

“From my infancy, I’ve watched and admired her talent and love of everything fashionable bloom. I’m so proud of her,” she said.

Nicara added: “From designing hats to fascinators and full-on outfits, this is something my mother is truly passionate about and something that will take her far. Her hats have already traveled to the Kentucky Derby and I look forward to her doing even bigger things — growing and glowing.”

At the Kentucky Derby Horse Race in the United States, an international reporter was amazed by a Bahamian flag-themed hat worn by Tamara Smith, and was adamant that she let his audience know who made it. Ever since, O’Brien has been committed to not only sharing her talent with The Bahamas, but the international market too.

Those interested in Gertie’s Hats or one of her shows can reach her by email at gertie.obrien@gmail.com or by phone at 242-544-2953; or follow her on Instagram @gertieobrien and @gertyshats.