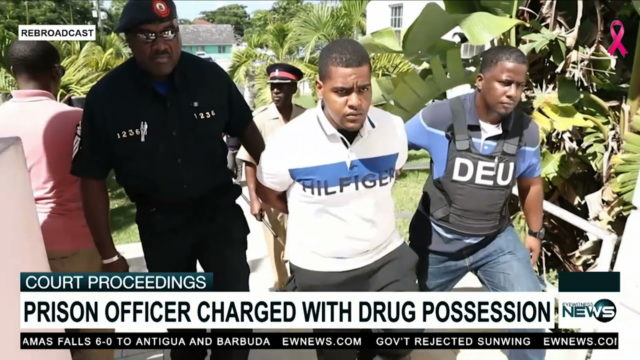 Another officer of the Bahamas Department of Corrections (BDOC) was hauled before the court on Monday.

BDOC officer Dennis Watson, 21, and Damal Cartwright, 23, an employee of Lyford Cay Summer Home Construction, appeared before magistrate Subusola Swain. Both were charged with possession of dangerous drugs with intent to supply.  Both men pleaded guilty to the charge.

The two were spotted in a Silver Toyota Passo at 7:30 p.m. on Friday, October 12. Officers said that when both the driver and passenger spotted them, they began to act suspiciously. This led to the two being pulled over and searched. Police reportedly discovered four packages of marijuana, which accumulated to 9.5 ounces.

The defendants were represented by two different lawyers – Cartwright by Tony Scriven and Watson by Allen Emmanuel. Both representatives pleaded for their clients to be given some leniency and told the magistrate that they are aware of their wrongdoings and “intend to change”.

Assistant Chief Magistrate Subusola Swain, said it is impossible for her to look past the fact that Dennis Watson is a prison officer and he should have acted accordingly.

Both men were sentenced to pay a fine of $2,000 or 1 year in prison with bail set at $5,000 each. The drugs found will be destroyed and recorded. Cartwright and Watson will return to court on January 28, 2019 to be tested to prove that their bodies are drug-free.

Watson was the second BDOC officer to be arraigned this month. Earlier this month, Antonio Harrison Cash, 27, pleaded guilty to drug possession with the intent to supply. He was sentenced to three months behind bars and was fined $2,000. He was also ordered to receive counselling by prison chaplain Leonard Clark.