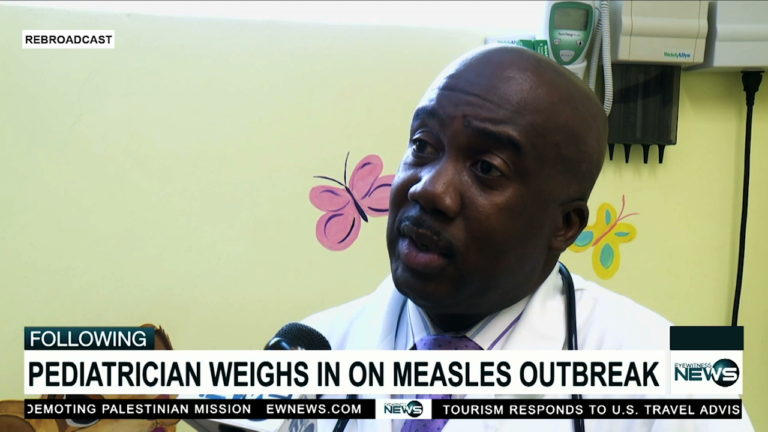 NASSAU, BAHAMAS – Minister of Health Dr. Duane Sands revealed on Monday that another case of measles has been reported.

In an interview with reporters on the sidelines of a gaming addiction symposium, Sands said the brother of the first reported victim of measles has also contracted the disease.

Two weeks ago, the health minister confirmed that a four-year-old child who was visiting The Bahamas from Europe was infected with measles and was to remain hospitalized until he was no longer infectious.

Yesterday, Dr. Sands said, “We can now confirm that the brother of the first patient has developed signs and symptoms of measles, but that child was quarantined and has posed no threat to any additional persons.”

Also weighing in on the measles discussion yesterday was Pediatrician, Dr. Carlos Thomas, who told Eyewitness News that a measles outbreak is concerning.

“We are particularly concerned because in The Bahamas our vaccine rate has decreased over the years,” he said.

“We used to boast 95-96 per cent compliance with vaccines and now we are down to the high 80s, and that is very concerning because whenever vaccine rates go down you see an increase in diseases and measles is very important to pay attention to because it can affect anybody.”

Last month, Minister Sands told media that the only way to prevent the disease from spreading was to keep the vaccine coverage above 95 per cent.

He also revealed that he was conducting an MMR [measles, mumps and rubella] campaign targeting all children 10 years and younger as well as front-line workers such as Police, Customs and Immigration Officers, health care workers and hospitality industry workers.

Dr. Sands said the MMR vaccine has proven effective in preventing measles and he referred to the controversy surrounding the use of vaccinations and persons who are not opting to get them as ‘rubbish’.