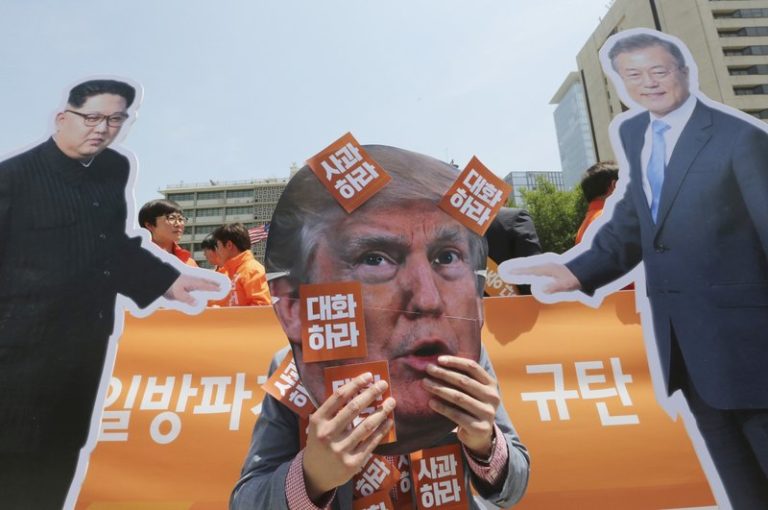 A protester wearing a mask of U.S. President Donald Trump, center, performs with cut-out photos of North Korean leader Kim Jong Un and South Korean President Moon Jae-in, right, during a rally against the United States’ policies against North Korea near the U.S. embassy in Seoul, South Korea, Friday, May 25, 2018. President Donald Trump’s decision to walk away from a plan to meet North Korean leader Kim Jong Un next month in Singapore caught a lot of people off guard, including, it appears, Kim Jong Un.Every indication is that Pyongyang still wants to make the meeting happen. And as soon as possible. The signs read ” Apology.” (AP Photo/Ahn Young-joon)

TOKYO (AP) — President Donald Trump’s decision to walk away from a plan to meet North Korean leader Kim Jong Un next month in Singapore caught a lot of people off guard, including, it appears, Kim Jong Un.

Every indication is that Pyongyang still wants to make the meeting happen. And as soon as possible.

Pyongyang made that clear Friday with a surprisingly conciliatory response to Trump’s sudden breakup letter, suggesting North Korean officials may now be thinking they overplayed their hand with defiant rhetoric and by deliberately missing preparatory meetings over the past couple of weeks. That presents an opening for diplomacy to continue if Washington is still game.

But the question remains: Should it be?

Kim has lots of reasons for wanting the summit. Sitting down as an equal with the U.S. president would go a long way toward legitimizing his regime on the world stage and weakening the rationale for continued trade sanctions, particularly by neighboring China. It also lowers the chances of military conflict, at least as long as talks are underway, and if Kim plays his cards right it could give him de facto recognition as the leader of a nuclear power.

Trump also appears to still want the summit to go through at some point. But his position is a bit more complicated.

Well before he decided to pull the plug on the June 12 summit plan, concerns were growing that the gap between the two leaders on the most fundamental issues was so wide that the potential danger of a major breakdown outweighed the whatever benefits might come from simply sitting down together for what would be a historic first.

It’s not even clear if Kim intends to give up his nuclear arsenal any time soon.

The Washington-Pyongyang rift widened dramatically after national security adviser John Bolton suggested the North must unilaterally give up its nuclear arsenal before it can expect any easing of U.S. economic and political pressure. For added impact, he said Libya, whose leader agreed to give up his nuclear program only to be deposed and killed, would be a good model.

But it was in his name the North issued its response to Trump’s decision Friday.

In a major tone shift, he not only left the door open to more talks, he virtually begged Trump to walk on through.

He said the North “inwardly highly appreciated” Trump’s decision to have the summit, “which any other U.S. presidents dared not.” He added he had hoped what he called the “Trump formula” would pave the way for substantial progress.

He even made the highly unusual move of playing down the significance of a statement of another top Foreign Ministry official who on Thursday called Vice President Mike Pence a “political dummy” and threatened Pyongyang would be just as willing to have a nuclear showdown with Washington as meet to negotiate.

That statement was apparently too much for Trump, compounding the North’s failure to show up for preparatory meetings in Singapore or, according to Secretary of State Mike Pompeo, answer the phone when U.S. officials called.

Such tactics are frustratingly familiar for anyone who has dealt with North Korean officials.

North Korean verbal barrages are a staple of its external propaganda — note its labeling of Trump as a “dotard” at the height of tensions last year. Just last week, Pyongyang abruptly cut off high-level contact with Seoul over an ongoing round of military exercises with U.S. troops and then refused until the last minute to allow South Korean journalists onto a pre-arranged media trip to observe the closing of its nuclear test site, which took place on Thursday.

North Korea’s switch to a tougher stance may reflect some behind-the-scenes influence by China, as Trump has suggested. Kim has already had two summits with Chinese President Xi Jinping. But it is also quite likely Pyongyang miscalculated that Trump was so invested in going through with the summit as planned that such tactics would drive a wedge between him and the hard-liners in his Cabinet.

For the moment, at least, they seem to be regretting that misstep.

“The U.S. side’s unilateral announcement of the cancellation of the summit makes us think over if we were truly right to have made efforts for it and to have opted for the new path,” Kim said in the statement. “But we remain unchanged in our goal and will to do everything we could for peace and stability of the Korean Peninsula and humankind, and we, broad-minded and open all the time, have the willingness to offer the U.S. side time and opportunity.”

So is Pyongyang now ready to make a deal Trump can brag about?

That’s not so clear.

Change in overall tone notwithstanding, Kim didn’t cave on Pyongyang’s demand that Washington drop its insistence on unilateral denuclearization before it lifts Trump’s policy of “maximum pressure.”

“The first meeting would not solve all, but solving even one at a time in a phased way would make the relations get better rather than making them get worse,” he said. “The U.S. should ponder over it.”

No doubt, Washington will. But with hard-liners like Bolton and Pence by the U.S. president’s side, the answer may not be what Kim Jong Un is hoping for.

This article was written by ERIC TALMADGE, the AP’s Pyongyang bureau chief.