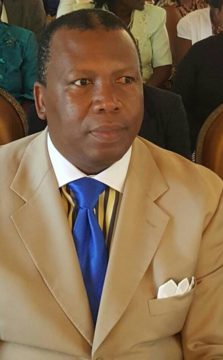 Mitchell: We had hoped to see Picewell serve in Cabinet “one day”

NASSAU, BAHAMAS — Following the surprise departure of South and Central Andros and Mangrove Cay MP Picewell Forbes from politics yesterday, the Progressive Liberal Party (PLP) said it was saddened by the news.

Forbes announced in Parliament that he would not be running for office in the upcoming general election and intends to quit politics altogether.

He told reporters he decided to “walk away” after he failed to receive proper support from the leadership of the PLP.

In a statement on the matter, PLP Chairman Fred Mitchell said: “We are saddened by the statement today that Picewell Forbes, MP, will not offer for the House of Assembly again.

“We had hoped to see him serve in the Cabinet one day.

“I hope we can continue to work together to ensure that the PLP retains the seat in the next general election and continue on its mission to make The Bahamas a better place for all.”

Speaking to reporters in the foyer of the House yesterday, Forbes said he made the decision days after visiting Andros and speaking to residents on the ground.

He said he would not have ultimately made the decision had he seen more “confidence” from the leadership of the PLP.

He further played coy when asked whether he had any reason to believe the party’s leadership was giving support to other aspiring candidates on the ground.

He added that despite his decision, he will remain a member of the PLP.

Forbes thanked several members of Parliament, including Mitchell, for their support and friendship throughout his tenure in politics.

In the party’s statement, Mitchell noted that he enjoyed the camaraderie and fellowship he and Forbes had in the party’s Parliamentary caucus

“I will miss this. I look forward to the remaining days in the House,” he said.

In November, amidst reports that Monique Pindling, daughter of the late Prime Minister Sir Lynden Pindling, was seeking the nomination for the seat, Davis assured that Picewell would receive the nomination.

He told a local daily: “All incumbents are the presumptive nominees of the party in the following election. Unless there is something egregious that would cause the national general council to see otherwise, but it has to be something palpable.”

Culmer insisted that because of this, “Davis’ word cannot be trusted”.

“This unequivocal act of betrayal committed against the South Andros MP is an even clearer indication that Davis, when pressed, will say anything that seems palatable in the moment, while knowingly and shamelessly speaking with a forked tongue,” he said.

“If the members of the PLP’s small parliamentary caucus can’t trust Davis, then what reason is there for the people of The Bahamas to entrust the leadership of this country to him? This act simply adds to the long list of reasons as to why Davis is unfit to lead.”