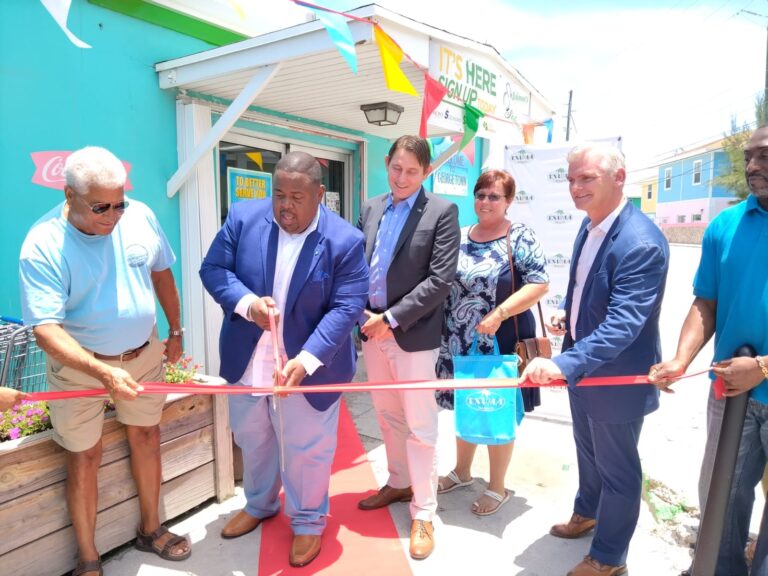 Parliamentary Secretary to the Ministry of Tourism, Investments & Aviation and Member of Parliament for Central & South Abaco John Pinder was in attendance to cut the ribbon and mark the special occasion.

AML purchased the Georgetown store in May of last year.

It has continued to build on the strong foundation established by the Minns family, the original owners who operated the store for more than three decades.

Over the past year, there have been a number of significant changes at the location that have had a positive impact.

AML Foods invested $300k to remodel the store, putting in a new point of sales system, registers, and front end, installing new flooring and lights, upgrading the air conditioning, and increasing the capacity of the warehouse to accommodate greater storage.

The store operates under the Solomon’s neighborhood format, but one change that was not made was to the name.

“Exuma Markets has been iconic to this community for decades and we wanted to retain the tradition of the location’s name and the direct link to the island,” said Gavin Watchorn, CEO & President of AML Foods.

“Later in the year, we will begin to replace the dairy cooler and install 24 feet of new refrigerated doors, increasing the capacity and variety in the dairy department.

“In all, we expect to invest close to $500k in renovations”.

Since taking over operations, Exuma Markets has increased arrivals of fresh produce and dairy products to the island and added over 2,000 new items to their assortment.

Customers can also order from Fresh Market and Cost Right on New Providence and have items delivered for pick-up or delivery.

Even more exciting was the launch of the loyalty program on the island.

Customers on Exuma can sign up for ‘My Solomon’s Smart Rewards’ and earn and redeem points when shopping at Exuma Markets as well as any Solomon’s or Solomon’s Fresh Market location on New Providence or Grand Bahama.

Watchorn further said that AML Foods is committed to the island of Exuma and believes in making a positive impact on the communities that they serve.

During their first year, AML donated approximately $25,000 to local groups and charities, and to commemorate this occasion, hosted a Domino’s Pizza Party for the kids at the Georgetown Primary School and The School for Exceptional Learning.

Watchorn thanked the community for their support, feedback, and suggestions and announced the launch of Ecommerce from the store later in the year.

He said: “We look forward to continuing to grow in The Exumas, introducing new services for the island and working with key stakeholders to ensure that we become and remain a true corporate partner”.

During the ceremony, Dino Duncombe, a longtime resident of Exuma, with a wealth of experience in grocery retail, was announced as the new store manager.

Watchorn said: “It’s the company’s intent to ensure that the local team is well trained and ready to assume any role with increased responsibilities.”

The entire Exuma community is invited to visit the store this weekend for the celebrations. There will be special prices on items, sampling, and give-a-ways from Thursday to Sunday.