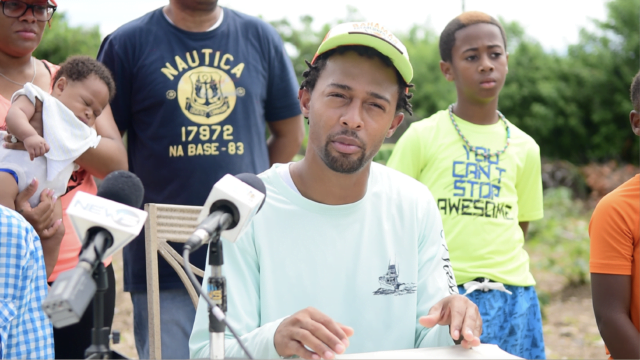 NASSAU, BAHAMAS – A Pinewood Gardens resident, who has alleged that he and others have founded a start-up garden for the community, on Tuesday called on the member of parliament for Pinewood, Rueben Rahming, to honor his commitment in the sum of $25,000 towards the garden’s growth.

Rahming, however, has denied making such a commitment.

In his contribution to the 2019/2020 budget debate in the House of Assembly last week Thursday, Rahming spoke of the creation of a Pinewood ‘garden’ where residents would be able to grow fruits and vegetables, etc.

At a press conference held yesterday, Jerad Darville, a Pinewood Gardens resident commented on Rahming’s contribution to the debate, saying that the community was proud of the recognition as they had built the garden from the ground up in December 2018.

Darville noted, however, that the community is still making a plea to Rahming to honor his commitment.

“The community spent roughly $25,000 dollars on this transformation and we hope that the MP’s financial pledge can at least match our $25,000 dollars,” Darville claimed. “However, it has been difficult at times for us to reach the Member of Parliament or his team to follow-up on his financial pledge and to plan a date and time for us to get together to show him our receipts and our reports on how well the community worked, and for him to present us with his pledge cheque of support matching our financial efforts.”

But in interview with media outside of the House of Assembly yesterday, Rahming told media that there was never such a commitment made and the Darville was trying to create political mischief.

“First of all, in my debate speech I didn’t speak to this,” Rahming said. “I spoke to a project,  a community garden, not that project [that Darville speaks of].”

Rahming added that the land where Darville holds his Garden is land that reportedly belongs  to the Water and Sewerage Corporation, which was cleared down to avoid it being a dumping ground.

“We had Water and Sewerage come and clean it down. He immediately came and started squatting on it,” Rahming alleged.  “I warned him that no MP has the authority to give anybody use of a government corporation’s land.”

Rahming referred to the entire ordeal is an act of ‘political mischief’ as a Pinewood garden has not been established as yet.

Rahming said he has plans to invest in the Pinewood garden and it is an idea that he has been working on for nearly two years. He noted, however, that the entire Pinewood community would be involved.