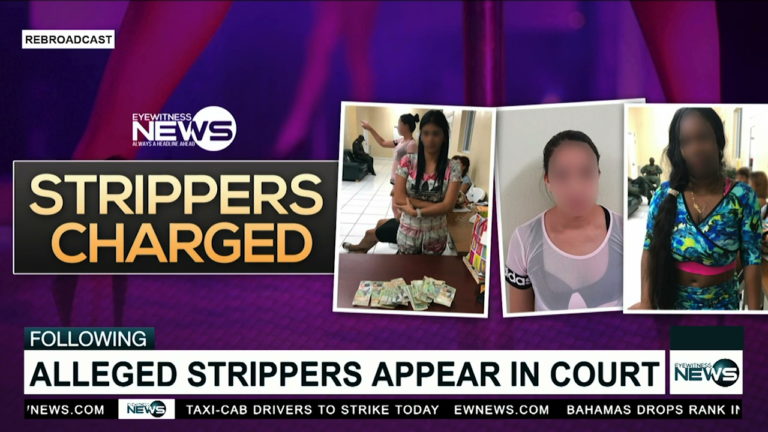 NASSAU, BAHAMAS –  Eight foreign nationals who were arrested earlier this week in various nightclubs for allegedly engaging in exotic dancing were charged in a magistrate’s court on Wednesday.

The women were fined $3,000 each or on default they would serve three months imprisonment at The Bahamas Department of Corrections.

Sidni Torres, a Colombian and Asha Anderson, a Trinidadian, were additionally charged and convicted of overstaying. The duo were fined $1,000.00 each.

Fines were not paid and all persons were subsequently turned over to The Royal Bahamas Police Force for transport to the Bahamas Department of Corrections.

During their court appearance, police reported that undercover officers visited Cheetahs Upscale Bikini Sporting Lounge on East Bay Street and Xclusive Sporting Lounge on Faith Avenue on Monday night, when they found the defendants dancing in their underwear in exchange for money without a work permit.

Varon and Palacio, the eldest of the group, told the magistrate that they were parents.

Mara Varon told the magistrate that she is the mother of four and it was never her intention to commit a crime, but she needed to provide for her kids.

Vogt-Evans said she was troubled by their actions and told them to rethink their profession.

Also charged yesterday was Oseane Jean, Marco Richard and Tanis Jean, all Haitians nationals, who were charged with illegal landing.

The men were fined $3000 each and will serve one month at Bahamas Department of Corrections.