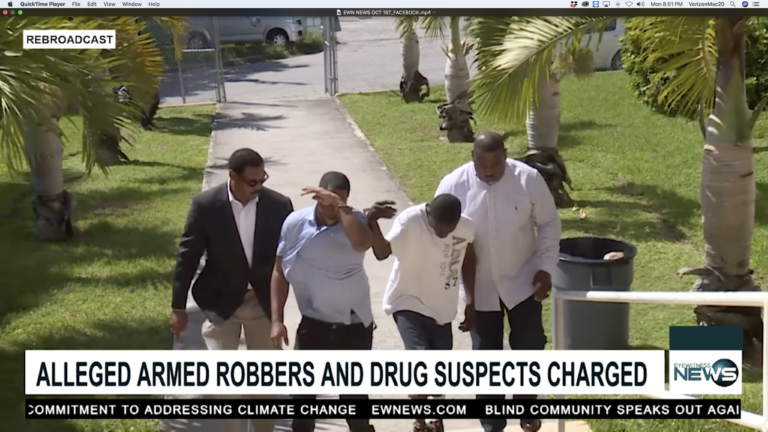 Akandi Gibson, 31, and Malik Smith, 23, were charged Monday with the recent armed robbery that occurred in front of the Royal Bank of Canada on Prince Charles Drive on September 24.

According to reports, on September 24, Smith allegedly robbed Kevin Major of $4,000 dollars that he had planned to deposit. Smith then attempted to flee the scene but was shot by a police officer.

The other suspect who fled the scene is believed to have been Gibson. Gibson was charged Monday with abetting armed robbery. However, he told Magistrate Pratt that he did not understand how he got caught up in the matter. He said that he had rented a purple self-drive vehicle and the alleged getaway car in the matter was a silver SD.

The two suspects were not required to enter a plea and have been remanded to the Department of Corrections until December 12 when they are set to stand trial.

In other court matters, Kendrick Humes, 22, was charged with possession of a large sum of suspected marijuana.

According to reports, around 8:48 p.m., acting on information and a search warrant, police visited the home of Humes where they found 283 pounds of marijuana. Humes told the court as well as police officers that he was holding the drugs for someone but would not say who because he feared for the lives of his family.

Humes was sentenced to two years in prison of which he can appeal within seven days after the said sentence.

According to police reports, shortly before 2:00 a.m., on September 27, Mobile Division officers were on patrol on Elizabeth Avenue when they observed a sliver Honda vehicle with four males. The men, upon seeing the officers, began acting in a suspicious manner. Officers were able to bring the vehicle to a stop, conducted a search and recovered a .38 revolver and three rounds of ammunition.