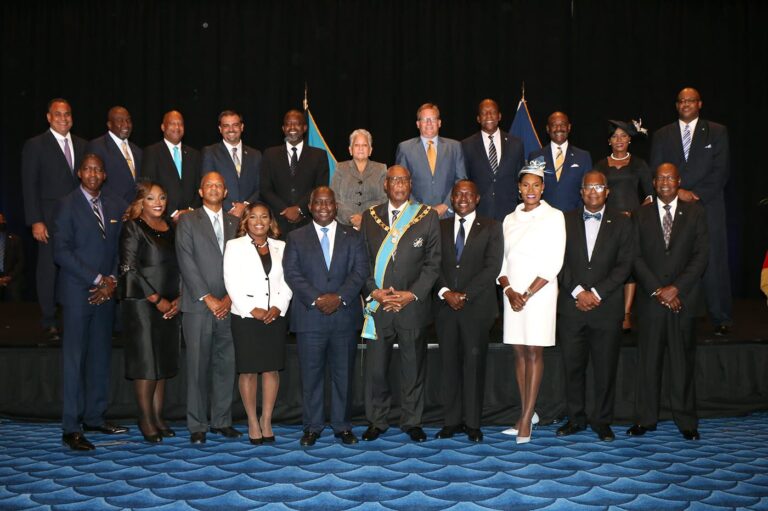 NASSAU, BAHAMAS — Eleven additional government ministers in the new Davis-led administration were sworn in and received their instruments of appointment yesterday, during a ceremony at Baha Mar Convention Centre.

The new appointments are in addition to the nine ministers sworn in on Monday, making it a 22-minister Cabinet  —  larger than the Minnis administration executive team.

Prime Minister Philip Davis sought to defend the appointments, insisting that all of the ministers are needed as the new government seeks to tackle the country’s major challenges.

“I don’t get into this elite pet talk,” Davis told reporters following the ceremony.

“I know everyone is trying to distract us from our job at hand.

“The enormity of the task here at hand is what caused me to select the number of persons I have.

“I have some additional parliament secretariats to be sworn in tomorrow.

“It will reflect the enormity of the challenge I have and all hands are needed on deck.”

Those new ministers sworn in include:

The Davis-led Cabinet made changes to several of the ministry portfolios that were a part of the Minnis administration and will do away with the Ministry of State for Disaster Preparedness, Management and Reconstruction, which was formed in the aftermath of Hurricane Dorian.

The prime minister said the elements of that ministry will now fall under the Office of the Prime Minister.

“That is why I appointed Basil McIntosh in the Ministry of Environment,” Davis said.

“With his background in constructional engineering and civil engineering and understanding the building resiliency that we require moving forward, he is in there. The fact is that the elements of that ministry are going to be following under the Office of the Prime minister.”

On Monday, nine ministers received their instruments of appointment, including:

Deputy Prime Minister Chester Cooper will serve as minister of Tourism, Investments and Aviation and Davis is expected to serve as Minister of Finance, Eyewitness News understands.

Former Prime Minister Dr Hubert Minnis is the only prime minister who did not take a Cabinet ministry initially and served as minister of ministers during the first three years in office.

Minnis temporarily served as Minister of Health and then took the Minister of Finance portfolio after former East Grand Bahama MP Peter Turnquest resigned from the position.

Davis will follow the trend of all other former prime ministers who served as finance ministers.