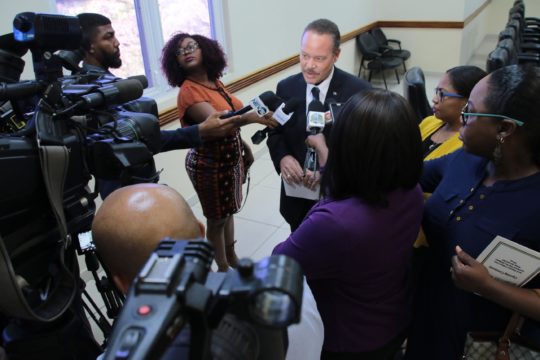 Attorney General Carl Bethel speaks to the press after the official opening of the Freedom of Information Act forum.

NASSAU, BAHAMAS – More than five months after the Senate delayed debate on the Non-Profit Organizations Bill to allow for a full review in consultation with civil society, Attorney General Carl Bethel suggested the government and the NPO sector are close to narrowing their sites on consensus of a new draft.

The government has until September 2019 to pass the NPO Bill, a Financial Action Task Force (FATF) requirement.

Bethel expressed there is sufficient time to deal with the legislation.

“We have intensified our discussions with civil society at the present time,” he told Eyewitness News Online.

“We have submitted some draft amendments for their commentary and we will see what they say.

“I sent them to one of the major civil society groups and I have invited their comments on it.

“So, we will see, but I think things will be moving at a pretty rapid [pace] right now once we get consensus on it; and then the government will move on the consensus.

“I would first, of course, have to advise my colleagues.

“I think that once they are properly briefed, they will be more than pleased to give their support to something that meets with the approbation — if not full — of civil society in the circumstances.”

Bethel said he believes that civil society groups in The Bahamas would prefer for the status quo to remain “where there was absolutely no oversight of any substance”.

He said an attempt to introduce stricter regulations over the sector under a previous administration prompted a judicial review that saw the process stunted.

“We don’t intend to fall into those sorts of traps and the reality is that the sector has to be to some extent better regulated,” Bethel said.

“That is a requirement of the global community and there is no escaping that.

“If we are to get The Bahamas off this gray list of the FATF, it is important that we carefully implement enhanced regulations of the financial sector and that means all aspects of it, particularly in the minds of the world, the non-profit sector.”

In December, the FATF re-evaluated The Bahamas’ compliance with its anti-money laundering and counter-terrorist financing requirements.

The body found The Bahamas compliant with the majority of its recommendations.

The re-evaluation and increased compliance ratings were expected to stave off any sanctions from the international financial regulatory body.

The NPO Bill seeks to regulate NPOs and required these organizations to register and provide financial statements, the identities of its members, demonstrate how gross annual income was applied, evidence of know your customer (KYC) procedures.

The latter of the bills was temporarily shelved in the Senate to allow for further review and consultation with civil society organization.

It remains to be seen when the Senate will finalize another draft of the legislation and whether it will have to be sent back to the House of Assembly for debate.

While crediting The Bahamas for being largely compliant with its anti-terrorism regime, the FATF said there were still “outstanding deficiencies” that it expects to be addressed.