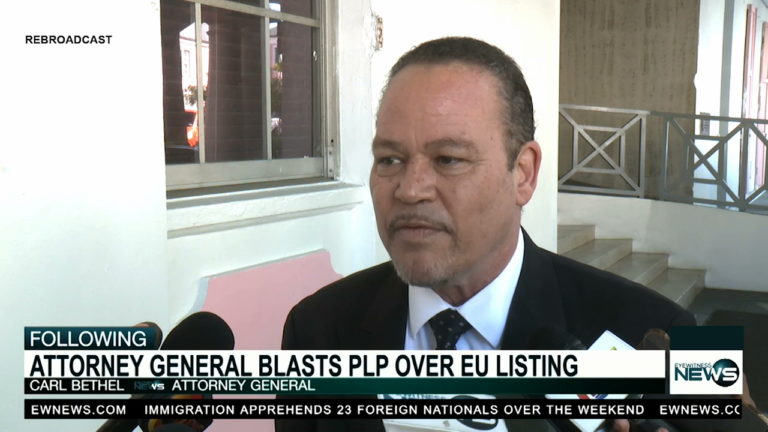 NASSAU, BAHAMAS – Attorney General Carl Bethel asserted on Tuesday that the European Union (EU) College of Commissioners used incorrect and “old information” to support its recent listing of The Bahamas as a haven for money laundering and terrorist financing.

“The reason we got listed in this EU commissioner’s list, is because of perceived deficiencies in our anti-money laundering and counter terrorism financing framework. Those deficiencies have been largely addressed,” Bethel explained.

The attorney general’s comments were made to media outside of Cabinet office on Tuesday morning.

He confirmed that government is currently engaged in dialogue with the commissioners in an effort to have the listing reversed.

The attorney general could not give a definite answer regarding when the EU commissioners may consider retracting its decision.

The attorney general also used his audience with local media on Tuesday to lambaste the  Progressive Liberal Party (PLP) for asserting on Monday night that government’s mishandling of the financial sector is what led to the country being recently listed as a territory to watch for money laundering and terrorist financing.

The listing by the European College of Commissioners was handed down on February 13.

On Monday night, the PLP asserted that the listing was a black eye for the country’s financial services sector; a direct result of mishandling under the Minnis administration.

The attorney general said the opposition party should remain silent on the matter.

He suggested that it was because of the PLP’s mismanagement that the Minnis led administration had to jump into damage control after taking office in 2017 to salvage the country’s financial sector’s reputation.

“When we came to office we met a state of utter neglect by the former government of this vital aspect of our governance. They failed to do anything of substance between 2015 and 2017 and that is why The Bahamas got placed into the FATF action Plan; because of the neglect of the PLP,” Bethel claimed.

“If they really want to have a debate about it; it won’t go well for them because the facts are the facts.

“We are trying to have a mature approach to this, a national approach to it and we don’t want to get into name calling, finger pointing or anything like that. But, for the opposition to spew falsehoods against this government and against the prime minister; is simply not something that will be tolerated and we will answer with the truth.”

The FATF blacklisted The Bahamas in October 2018 for being non-compliant with a number of its outlined task actions.

Records indicate that the country was only compliant with 18 of 40 task actions, according to Bethel.

“Those deficiencies have been largely addressed. In December 2018 they listed us as now being compliant with 30 out of the 40, right in company with the United States and other countries throughout the world,” Bethel noted.