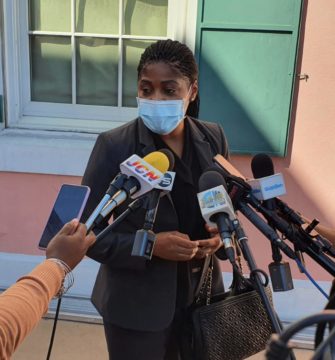 Minister of State for Disaster Preparedness, Management and Reconstruction Pakesia Parker-Edgecombe speaks with the media outside the House of Assembly on Wednesday, March 3, 2021. (FILE PHOTO)

NASSAU, BAHAMAS — Newly-appointed Minister of State for Disaster Preparedness, Management and Reconstruction Pakesia Parker-Edgecombe told the media today she feels confident about making an impact even with little time left before the next general election.

The next general election must be held by 2022, although there has been much speculation that an early election may be called this year.

Pakesia Parker-Edgecombe said: “We already have established a team in place for this ministry, which is fairly new for us in government.

“I look forward to working with that team for what has already been established while adding to the blueprint.

“I do know at this time the world continues to look at how we can become more resilient in our communities and all of the efforts will [be] placed on ensuring that will take place in The Bahamas.”

Her appointment came after Seabreeze MP Lanisha Rolle resigned as minister of youth, sports and culture last week, leaving the current Cabinet without any woman representative and prompting some sectors of society to criticize the government for a lack of female representation in governance.

Lewis was then appointed to replace Rolle as youth, sports and culture minister.

This left his position to be filled by Parker-Edgecombe.

Now the lone woman in Cabinet, Parker-Edgecombe admitted it is not a favorable position, but she said she will work to ensure women are represented through her.

“We have many females who will contribute to my voice in Cabinet. I plan on joining up with those voices in bringing forth their concerns,” she said.

“The empowerment is there because there are so many in different sectors and levels in our community. So, I will take from them and I will be their voice in Cabinet.

“But there are many females who I know and will use their voices through me.”