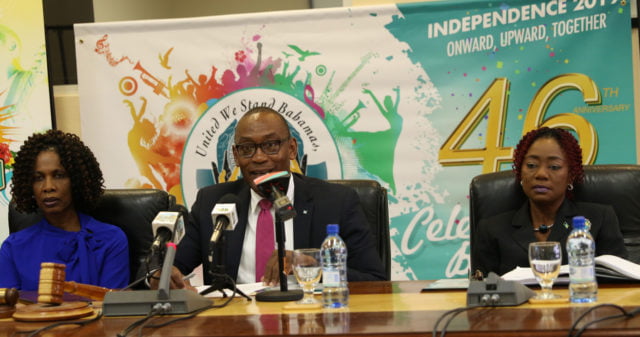 NASSAU, BAHAMAS – The country is gearing up to celebrate its 46th Anniversary of Independence on July 10.

As the nation prepares for the milestone, the Independence Anniversary Planning Committee on Thursday advised the public of an array of activities being scheduled to commemorate this important occasion.

The Pointe is also a sponsor for the celebrations.

This year’s event will be held under the theme, “United We Stand Bahamas… Together We Can.”

Mr. Humes said that the theme aptly reflects the importance of unity and hopes for Bahamians to ponder a time when solidarity and brotherhood were the glue that kept communities together.

“It is our hope that the promotion of this theme will cause Bahamians to reflect on the state of the society today and to ponder minute differences that we’ve allowed to creep in and divide us; and recognize the need for putting aside these difference in the national interest, so that we can move forward as a commonwealth of islands to create a great and brilliant future,” said Mr. Humes.

He also encouraged Bahamians to participate in activities in their personal time to celebrate the country’s Independence.

“We also encourage you to start decking your homes, your yards and cars,” he said. “Show your Bahamian pride and support the activities with family and friends. This year, we would like to see the public create their own private events and bring everyone together.  Have a backyard cookout, hold a picnic or visit each other’s homes.”

Over the next few weeks, committee members and stakeholders will promote the activities via several platforms including social media, billboards, press releases and radio appearances.

This article was written by Betty Vedrine – Bahamas Information Services.