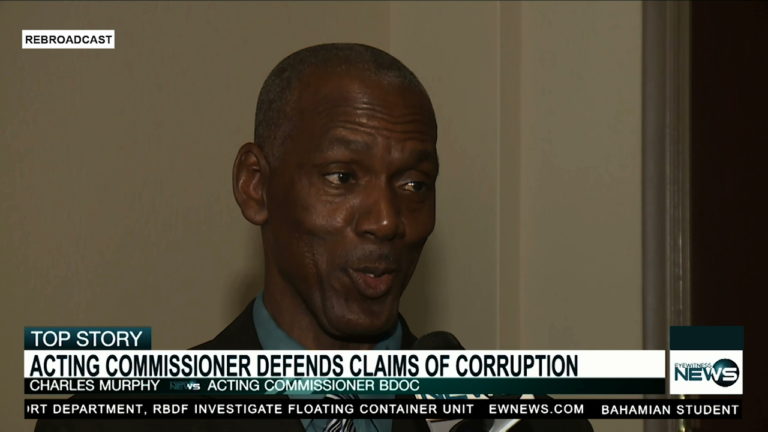 Newly appointed Acting Commissioner of the Bahamas Department of Corrections (BDOC), Charles Murphy, on Monday stressed that he has a zero-tolerance approach for any acts of impropriety at the correctional facility.

“I go to work every day just to give service to mankind and to my country,” said Murphy, who has served at the BDOC for the past 38 years. “We are working feverishly to circumvent and to bring an end to the corruption at The Bahamas Department of Corrections.”

Commissioner Patrick Wright retired earlier this year and was replaced by Murphy who headed the Maximum-Security Unit.

Last month, Eyewitness News aired a documentary which unveiled the horrifying and less than humane conditions at the prison. It also featured the candid views of officers and inmates.

Since airing, several officers spoke to Eyewitness News on the condition of anonymity and made several claims of on-going corruption at the BDOC coupled with allegations that officers were being victimized.

Yesterday, Murphy warned corrupt officers at the prison to, “Stop before we stop you.”

“I have a no tolerance level for corruption in any form, shape or fashion,” he said “We have been hired by the Bahamian people, the Bahamian people are paying us a salary, we have agreed to work for that salary and when we are no longer satisfied with that salary, we can salute the flag or we can turn our hat in. But as for corruption, it is a zero tolerance for me.”

Officers who spoke recently to Eyewitness News also expressed that Murphy should not have been offered the Acting Commissioner post, but Murphy retorted on Monday that his appointment came after years of preparation, and he knew that there would be naysayers.

“As for the naysayers, they did not just come around either,” he said. “As I was preparing myself [for the post] there were naysayers, and it is my duty at all times to remain focused. While they try to distract I try to attract.

“I continue to do what I have to do to bring forth changes and recognize that some will appreciate it while others won’t. I am satisfied that at the end of the day I would have done my best.”

Murphy affirmed that he is committed to changing conditions at the prison and upgrades have already begun.

“Many of them while in there came in there because they were ill prepared for society. While it is my intention to ensure that when they leave, they will be better prepared to occupy, live and work in society.”

Meanwhile, asked what he hopes his legacy would be during his tenure at an institution that has been challenged, Murphy said he wants to be viewed as an individual who seeks to bring change to the lives of prisoners and to the prison environment.