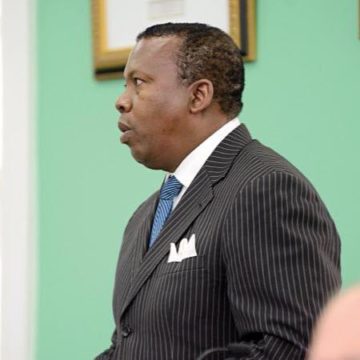 Minister of works promises Andros projects will be completed

NASSAU, BAHAMAS — Deputy Prime Minister Desmond Bannister yesterday supported the decision of Mangrove Cay and South And Central Andros MP Picewell Forbes, who will not be seeking reelection in the upcoming general election.

Forbes announced in Parliament on Monday that he would not be running for office and intends to quit politics altogether.

Soon after his announcement, he walked out of the House of Assembly and was greeted to a standing ovation, hits on the desks and hugs from government MPs.

Bannister, who spoke to Forbes following the announcement, praised the politician for his successes and the work he has done in his constituency.

“So, his legacy is complete by what he did and how he did it.”

Bannister noted that while he spoke to Forbes, whom he considers a long-time friend and colleague, earlier that morning, he was unaware of what he was going to do.

Bannister said he spoke with Forbes to affirm that what he did was “absolutely the right way to do it and the right way to let his people know that he was not going to contest the election”.

“He knows what he did was the right thing.”

The minister of works also said he has assured Forbes that the projects ongoing in South Andros are outstanding contributions to the legacy he left on the island.

He advised that he will ensure those projects are advanced.

Forbes was first elected to Parliament in 2007 as the MP for Central and South Andros and once again won his bid in the 2012 election.

He won his seat in the 2017 General Election with 849 votes, beating Free National Movement (FNM) candidate Zendal Forbes by 129 votes.

Bannister noted: “He was not elevated in two terms that his party was in power. But if you look at the leaders of his party and what they’ve done in their constituencies, none of them has done what he’s done in his constituency.

“He has an outstanding legacy; he will always be my friend.”

Forbes told reporters he decided to “walk away” after he failed to receive proper support from the leadership of the Progressive Liberal Party (PLP).

He added that he would not have ultimately made the decision had he seen more “confidence” from the leadership of the PLP.

While Bannister stopped short of addressing the PLP’s internal affairs, he said: “I know Picewell Forbes. I know what he’s done in South Andros. I know the legacy he has and I know the outstanding commitment he has and at some stage, I will speak to that publicly.”