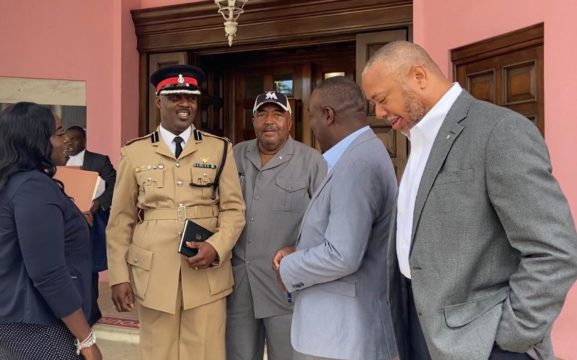 NASSAU, BAHAMAS- Assistant Commissioner of Police Ken Strachan appeared before Justice Keith Thompson today in his suit against the government, after being transferred to the Willie Mae Pratt and Simpson Penn Centers to serve as chief of security.

In the first hearing of the matter, Strachan appeared with his attorneys Wayne Munroe Q.C., and Krystian Butler.

The parties have yet to file any evidence.

Munroe joked that they need to “Hurry catch the commissioner while he is still commissioner.”

Commissioner of Police Anthony Ferguson has remained tight-lipped about his possible retirement from the RBPF, however, recent photos on the RBPF Facebook page show the commissioner on a farewell tour in South Andros.

Strachan is seeking damages, exemplary damages and cost, as well as other relief, alleging that the commission abused his power.

He is also seeking a declaration that his transfer to the Willie Mae Pratt and Simpson Penn Centers is unlawful in its terms as it amounts to a dismissal from Strachan’s senior post, a demotion in rank and wrongful termination of his contract of service.

The assistant commissioner is also seeking a declaration that his mandator leave from the RBPF earlier this year was not “properly to be classified as vacation leave” and the acts of the commissioner of police is inconsistent with the appointment, removal and disciplinary procedures.

Strachan received a letter from the commissioner on March 20, 2019, advising him that he had accumulated 36 weeks’ vacation and some of the accumulated leave would need to be taken from March 25, 2019 to December 8, 2019.

When Strachan reported to duty on December 9, 2019, he was handed a signed letter by the commissioner appointing him as chief of security at the centers effective immediately.

He was to report to the permanent secretary in the Ministry of Social Services and Urban Development, according to the letter.

ACP Clayton Fernander and ACP Leamond Deleveaux were also present for the hearing.

The pair have also initiated legal action, with sources close to the matter stating Deleveaux is also considering fighting the reassignment in court.