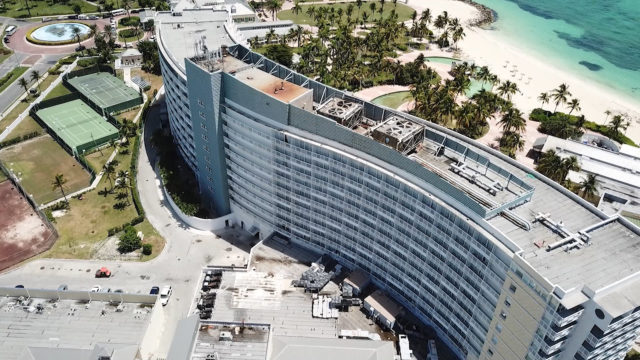 NASSAU, BAHAMAS — Seven people were granted temporary exemption of a travel health visa to enter Grand Bahama over the weekend.

A letter from the Office of The Prime Minister to Director of the Hotel Corporation Terrence Roberts, dated on March 5, advised that after consultation with the Ministry of Health, there was no objection to a temporary exemption being granted for the group who were “special guests of the Grand Lucayan Resort” arriving into Grand Bahama via private aircraft.

The exemption was granted “with the understanding that COVID-19 test results will be submitted once received”.

“It is further advised that all guests strictly adhere to all public health protocols and guidelines as outlined by the Ministry of Health,” the letter added.

Eyewitness News understands that the group was on the island to tour the resort — which has already been sold.

To enter The Bahamas or travel inter-island, a person must obtain a negative RT-PCR COVID-19 test within five days of travel, a health visa and a follow-up rapid antigen test on day five of travel.

When asked about the exemption, Tourism Minister Dionisio D’Aguilar told Eyewitness News the group was exempted from applying for a visa after asking for special permission.

D’Aguilar said they entered the country and presented their negative RT-PCR tests upon arrival on Grand Bahama.

He said they stayed at the Grand Lucayan for one night and left for Jamaica the next day.

The government purchased the resort in August 2018.

In March, the government signed a heads of agreement with Bahamas Port Investments Limited, a joint venture between Royal Caribbean International and the ITM Group, for the sale of the resort and development of a cruise port at Freeport Harbour that was expected to accommodate three ships in phase one, and up to seven ships in subsequent phases.

The ongoing COVID-19 pandemic has delayed the sale, according to the government, which has said the developers remain committed to the deal.

When will our gubmint dem do what many other countries are doing and require a 3 day window rapid test for travel in the Bahamas. Even the WHO has stated the rt-pcr tests have given numerous false posituves as labs are running cycles too high. Be adaptive and not reactive. By the way: why are we still under curfew 1 year later????

The major delima loes with Bahamians themselves who though many see the fallacy in this Covid 19 protocol…still lack the courage to unite & act on & on one accord to stop these most ridiculous mandates..ie
Lockdown..even though the implementations questionable, & /tne numbers do not justify….testing protocol that are not fully evidential proven accurate…simple Covid 19 proven cure & preventative medical liquids…..Time to wake up. So many abnormalities….& the flagrant discretion given to foreigners over Bahamians…to enter & leave…….A farce people….no truth here but subjugation and bondage ……defigned for control……
TIME TO WAKE..YOU ARE BEING MANIPULATED ?