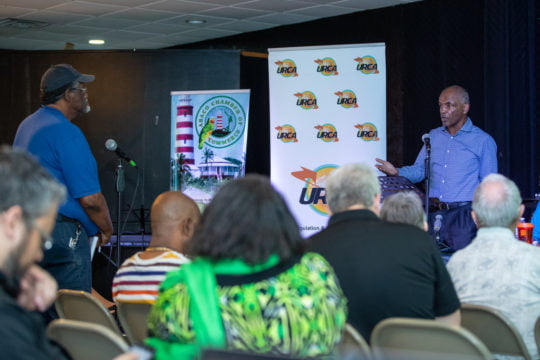 MARSH HARBOUR, ABACO – Abaco residents got the opportunity to share their thoughts and to discuss concerns with URCA representatives in a Town Hall Meeting on Wednesday April 17th, as the Utilities Regulation and Competition Authority (URCA) continued their campaign of public consultations across the northern islands.

Carlton Smith, URCA’s Director of Electronic Communications and Shevonn Cambridge, URCA’s Director of Utilities & Energy, sat down with residents in a public town meeting to discuss various concerns related to consumer protection, alternative energy, disaster preparedness and management, and several electronic communications projects; all done as part of the authority’s initiative to promote transparency with consumers.

During his review of the Electricity Sector projects, Mr. Cambridge addressed URCA’s upcoming campaign on Small-Scale Renewable Generation.  He noted that while flying into Abaco he saw solar panels installed on a number of homes, however  the regulator has no record of any applicants or approved and registered  users on the island.

“It is a matter of safety, first and foremost,” Cambridge explained.  “As the regulator we want to ensure that the systems, whether grid-tied or not, are properly installed and if they are grid-tied that we have record of them on file.”

He went on to explain that this knowledge helps to ensure the safety of the homeowners as well as BPL employees who may have to work in and around such systems when performing their duties. He also spoke to the importance of the application process in regards the government National Energy Policy (NEP).

“One of the other reasons it is important for the registration is our ability to track progress towards the goal of 30% renewable generation by 2030,” Cambridge added. “It is difficult to fully understand how we are performing and progressing towards that goal if consumers aren’t applying and getting registered.”

The town hall meeting continued with Mr. Smith presenting the authority’s focal areas for 2019 in the Electronic Communications Sector. One of the key components of this discussion, which resonated with attendees, was disaster preparedness and management.

“We recognize the challenges that have faced family island consumers during and in the aftermath of natural disasters,” Smith acknowledged. “One of our key projects for 2019 will be speaking to our providers’ ability to maintain services during disasters and more swiftly restore services if they do fail.”

This particular point raised questions for some residents regarding the application process and requirements for obtaining ham radio operating licenses. Mr. Smith advised residents that any reason for denying an application would have and should have been communicated by the authority. He further addressed the matter advising residents that URCA would take a look at the applications in question to determine if there is room to reconsider.

Smith continued the discussion by speaking to URCA’s plan to publish updated Consumer Protection Regulations as one of its projects for 2019. He reminded residents that URCA’s decisions are based on consultation with all of its stakeholders, including the general public.

“All of our decisions are made through consultations, so we take it to the public and say, these are the things we are looking at, what do you think,” he explained, “URCA comes to a final determination based on the consumer input on what they believe is best for the public sector at that time.”

Smith’s explanation came after residents brought up major concerns about internet service providers (ISPs) and their obligations to provide quality based service to consumers. One resident cited the non-guarantee of optimum service from the country’s telecommunication providers and the lack of protection for its customers.

The Director spoke to the concerns, explaining the guidelines between ISPs and customers for proper solutions. “If people believe that they’re not getting the value for the money that they’re spending… then that’s reason for concern,” Smith stated “If you’re not getting the satisfaction, then you bring it to us and we’ll investigate it and find out why these services consistently are at a certain level.”

“That document is extremely important because it helps us to determine what priorities [and] issues we’re having to address [as well as] those critical areas that would impact the stakeholders and consumers.” Smith revealed that the new policy is not only fundamental for the advancement of the electronic communication sector in The Bahamas, but that a draft of the document has been submitted for review which expects to garner public feedback.

The Directors addressed attendees about several other initiatives and also reviewed URCA’s 2019 budget. Chamber of Commerce President, Ken Hutton was also present at the town hall meeting and urged URCA to attend upcoming meetings to discuss disaster preparedness and management initiatives for the island.

URCA executives will head to Grand Bahama next month (May 7-9th) for a series of Town Hall Meetings and “Pop Up” office hours at the GB Chamber of Commerce. Both Nassau and Abaco meetings were livestreamed and can be viewed on URCA’s Facebook page, the Freeport Town Hall will also be livestreamed, and meetings will also take place in Eight Mile Rock and High Rock.