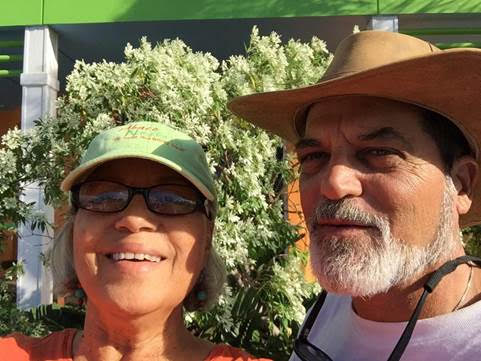 Founders of Abaco Neem say: “We’re not giving up on Abaco”

NASSAU, BAHAMAS — For five blistering hours, Daphne de Gregory held her own against a raging hurricane, using her body like a concrete block to keep a dormer door shut while her husband, Nick Miaoulis, did the same with the adjoining door. All that stood between them and the howling 220 mile an hour winds of Hurricane Dorian was a sheet of glass. Together, they prayed, minute after minute, hour after hour. When one was nearly worn out and on the verge of collapse, the other prayed louder, offering up encouragement.

Back and forth it went until the wind finally subsided and for the first time in what seemed an eternity, Nick and Daphne breathed.

The couple had survived the storm atop the second floor of their Marsh Harbour, Abaco, business, Abaco Neem. Today, they said they were among the luckiest. Theirs was one of the few businesses left standing.

“We’re not giving up on Abaco,” the couple said.

Some of their equipment was damaged and the cover over that equipment ripped into shreds.

While the founders of Abaco Neem were in Nassau for business Tuesday, meeting with their insurers and those who retail their products and later sharing their story with a Toastmasters group, they said they will never fully understand why they were spared.

“Why God let our building stand, why God let us survive, we will never know,” they said. “We just trust that good follows good.”

Congratulations Nick and Daphne. You are गीत pillers of strength, and as strong as Neem. God bless. DR B. N. Vyas. President World Neem Organizations.

I am very happy to hear you both were spared.We all are here for a purpose.