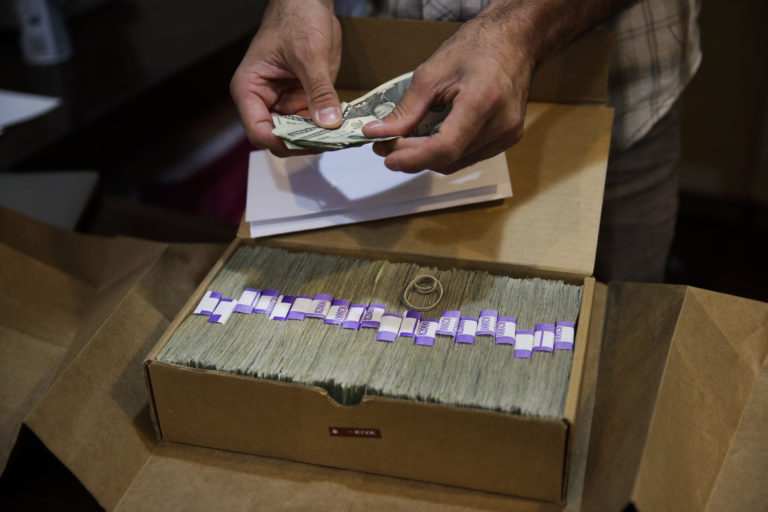 FILE - In this June 27, 2017, file photo, Jerred Kiloh, owner of the Higher Path medical marijuana dispensary, prepares his monthly tax payment, $40,131.88 in cash in Los Angeles. For Kiloh, the cash is a daily hassle. It needs to be counted repeatedly to safeguard against loss. California officials will take a detailed look at the potential to create a taxpayer-backed bank to handle what could be billions of dollars generated by the state's legal marijuana industry. State Treasurer John Chiang stopped short of endorsing the idea but said Tuesday, Jan. 30, 2018, his office would work with the state attorney general to examine how a weed bank might function. (AP Photo/Jae C. Hong, File)

LOS ANGELES (AP) — California officials announced Tuesday that they will take a detailed look at the possibility of creating a taxpayer-backed bank to handle what could be billions of dollars in revenue generated by the state’s legal marijuana industry.

State Treasurer John Chiang stopped short of endorsing the idea but said his office would work with the state attorney general to examine how a weed bank might function.

Legal pot sales kicked off in California on Jan. 1. However, many banks don’t want anything to do with pot money for fear it could expose them to legal trouble from the federal government, which still lists marijuana as illegal.

That means a lot of pot business is conducted in cash, sometimes tens of thousands of dollars, which is risky for cannabis workers and the public.

Is a public bank a solution?

Completing the study is expected to take about a year.

However, the idea comes with formidable risks that were outlined in a state report last year, including unknown startup costs, the probability of losses for several years or more that California taxpayers would have to cover and trouble obtaining federal regulatory approval.

Another problem: The Trump administration has signaled a potentially more aggressive approach to marijuana prosecution by U.S. prosecutors.

That federal action “casts into turmoil a newly established industry that is creating jobs and tax revenues,” Chiang said.