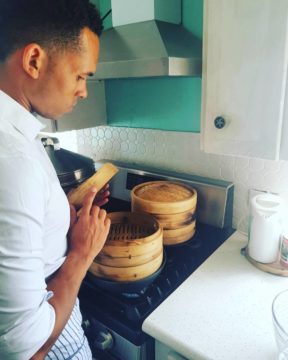 NASSAU, BAHAMAS – Hot cross buns are a huge part of Holy Week in The Bahamas and there’s a brand-new company shaking things up in the kitchen to add a new twist on an age-old tradition.

The New Duff, the brainchild of owner Kendrick Delaney, was launched a little over a year ago.

Delaney told Eyewitness News that the business has grown by leaps and bounds since its launch and so his team decided to expand its product offering by embracing the seasonal holiday tradition of hot cross buns.

When Eyewitness News Online arrived at the company’s Colony Estates location the sweet smell of baking pastries greeted us at the front door.

After making our way into the kitchen, where the magic unfolds, we got a first-hand look at how the hot cross bun production line operates.

Deja Burrows, Manager, The New Duff explained that the process is a tedious but enjoyable one.

She said the new flavors have been a hit.

“We offer our duffs in several different flavors and so we wanted to offer the same thing with our hot cross buns,” she shared.

“The response has been great.

“People have been excited and have been ordering the new flavors because they can’t get them anywhere else.”

Delaney explained that the secret behind his company’s fluffy duff selections is an age old Asian tradition that he learned while living in Singapore.

He said that Bahamians have fallen in love with the technique for his new style of guava duff.

“I lived in Singapore for a while and every morning they would have these steamed buns in a basket. So, I thought we could use the same basket to get the steamed texture for our products,” he shared.

“So, we steam ours over hot water in a Chinese basket.”

Delaney and his team managed to coin that same recipe for their hot cross buns as well.

“It’s the same technique with the dough; we are still using a fluffy dough. But, we are baking them for the same traditional taste.”

The young business owner said he is encouraged by the overwhelming response to his new business.

“We’re really excited about everything that is happening with The New Duff,” he said.

“This is really a new and exciting idea that we launched to provide a fun product for the Easter.”