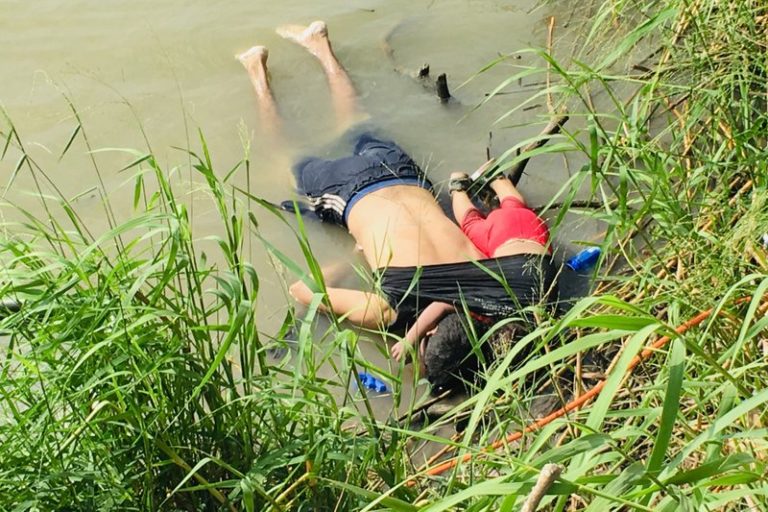 The bodies of Salvadoran migrant Oscar Alberto Martínez Ramírez and his nearly 2-year-old daughter Valeria lie on the bank of the Rio Grande in Matamoros, Mexico, Monday, June 24, 2019, after they drowned trying to cross the river to Brownsville, Texas. Martinez' wife, Tania told Mexican authorities she watched her husband and child disappear in the strong current. This photograph was first published in the Mexican newspaper La Jornada. (AP Photo/Julia Le Duc)

MEXICO CITY (AP) — The man and his 23-month-old daughter lay face down in shallow water along the bank of the Rio Grande, his black shirt hiked up to his chest with the girl tucked inside. Her arm was draped around his neck suggesting she clung to him in her final moments.

The searing photograph of the sad discovery of their bodies on Monday, captured by journalist Julia Le Duc and published by Mexican newspaper La Jornada, highlights the perils faced by mostly Central American migrants fleeing violence and poverty and hoping for asylum in the United States.

According to Le Duc’s reporting for La Jornada, Óscar Alberto Martínez Ramírez, frustrated because the family from El Salvador was unable to present themselves to U.S. authorities and request asylum, swam across the river on Sunday with his daughter, Valeria.

He set her on the U.S. bank of the river and started back for his wife, Tania Vanessa Ávalos, but seeing him move away the girl threw herself into the waters. Martínez returned and was able to grab Valeria, but the current swept them both away. 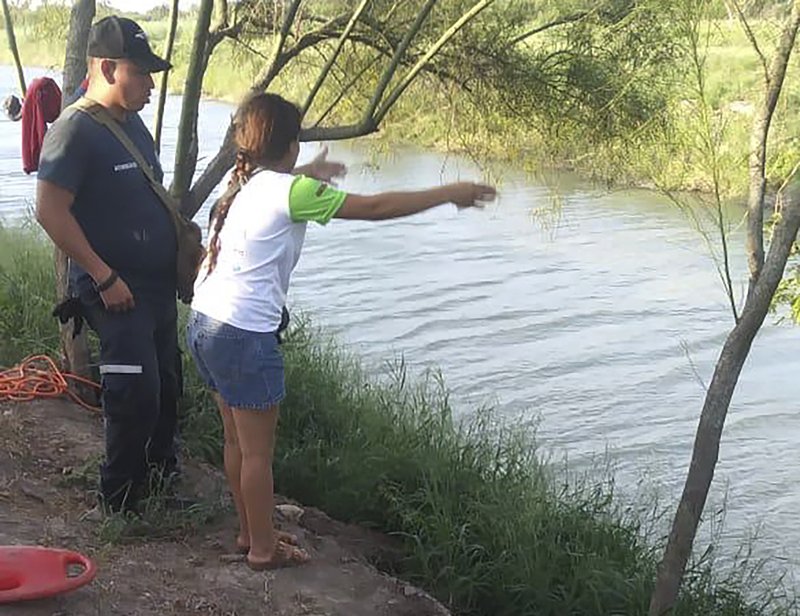 The account was based on remarks by Ávalos to police at the scene — “amid tears” and “screams” — Le Duc told The Associated Press.

Details of the incident were confirmed Tuesday by a Tamaulipas state government official who was not authorized to discuss the matter publicly and spoke on condition of anonymity, and by Martínez’s mother back in El Salvador, Rosa Ramírez, who spoke with her daughter-in-law by phone afterward.

“When the girl jumped in is when he tried to reach her, but when he tried to grab the girl, he went in further … and he couldn’t get out,” Ramírez told the AP. “He put her in his shirt, and I imagine he told himself, ‘I’ve come this far’ and decided to go with her.”

From the scorching Sonoran Desert to the fast-moving Rio Grande, the 2,000-mile U.S.-Mexico border has long been an at times deadly crossing between ports of entry. A total of 283 migrant deaths were recorded last year; the toll so far this year has not been released. 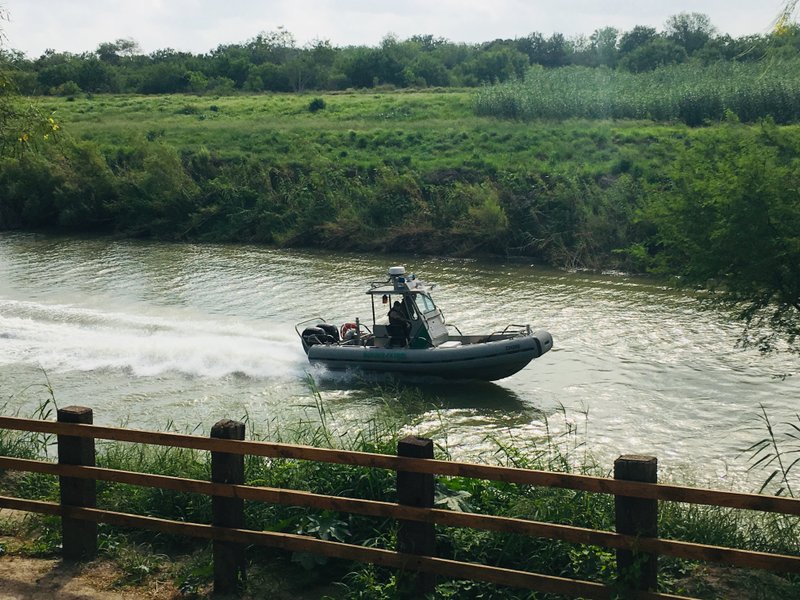 In recent weeks alone, two babies, a toddler and a woman were found dead in the sweltering heat. Three children and an adult from Honduras died in April after their raft capsized on the Rio Grande, and a 6-year-old from India was found dead earlier this month in Arizona, where temperatures routinely soar well above 100 degrees Fahrenheit.

The search for Martínez and his daughter was suspended Sunday due to darkness, and their bodies were discovered the next morning near Matamoros, Mexico, across from Brownsville, Texas, several hundred yards (meters) from where they had tried to cross and just a half-mile (1 kilometer) from an international bridge.

Tamaulipas immigration and civil defense officials have toured shelters beginning weeks ago to warn against attempting to cross the river, said to be swollen with water released from dams for irrigation. On the surface, the Rio Grande appears placid, but strong currents run beneath.

Ramírez said her son and his family left El Salvador on April 3 and spent about two months at a shelter in Tapachula, near Mexico’s border with Guatemala.

“I begged them not to go, but he wanted to scrape together money to build a home,” Ramírez said. “They hoped to be there a few years and save up for the house.”

El Salvador’s foreign ministry said it was working to assist the family, including Ávalos, who was at a border migrant shelter following the drownings. The bodies were expected to be flown to El Salvador on Thursday. 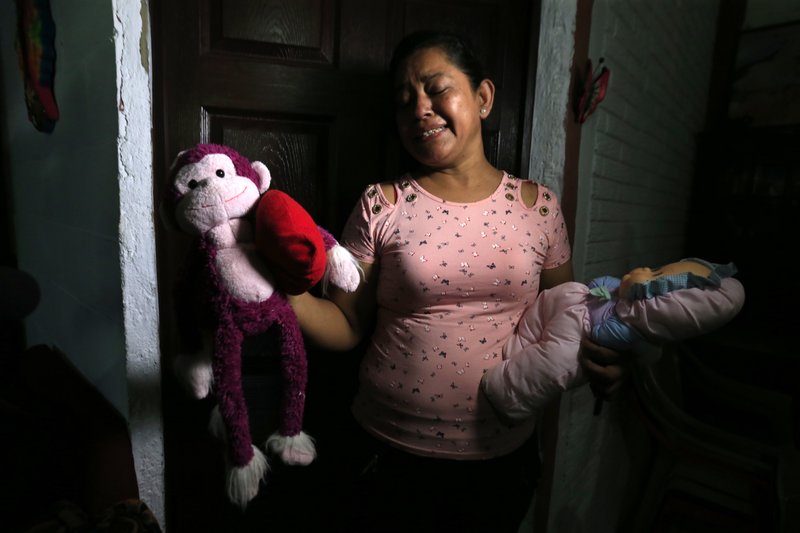 The photo recalls the 2015 image of a 3-year-old Syrian boy who drowned in the Mediterranean near Turkey, though it remains to be seen whether it may have the same impact in focusing international attention on migration to the U.S.

“Very regrettable that this would happen,” Mexican President Andres Manuel Lopez Obrador said Tuesday in response to a question about the photograph. “We have always denounced that as there is more rejection in the United States, there are people who lose their lives in the desert or crossing” the river.

There was no immediate comment from the White House.

U.S. “metering” policy has dramatically reduced the number of migrants who are allowed to request asylum, down from dozens per day previously to sometimes just a handful at some ports of entry.

The Tamaulipas government official said the family arrived in Matamoros early Sunday and went to the U.S. Consulate to try to get a date to request asylum. The mother is 21 years old and the father was 25, he added.

But waits are long there as elsewhere along the border. Last week, a shelter director said only about 40 to 45 asylum interviews were being conducted in Matamoros each week, while somewhere in the neighborhood of 800-1,700 names were on a waiting list.

It’s not clear what happened to the family at the U.S. Consulate, but later in the day they made the decision to cross. The Tamaulipas official said the father and daughter set off from a small park that abuts the river. Civil defense officials arrived at the scene at 7 p.m. Sunday and later took the wife to the shelter.

“I was drawn to the girl’s arm on her father,” Le Duc said as she described arriving at the scene. “It was something that moved me in the extreme because it reflects that until her last breath, she was joined to him not only by the shirt but also in that embrace in which they passed together into death.”

“It’s a horrifying image,” Maureen Meyer, a specialist on immigration at the Washington Office on Latin America, which advocates for human rights in the region, said of the photograph. “And I think it speaks so clearly to the real risks of these U.S. programs that are either returning people back to Mexico seeking asylum or in this case limiting how many people can enter the U.S. every day.” 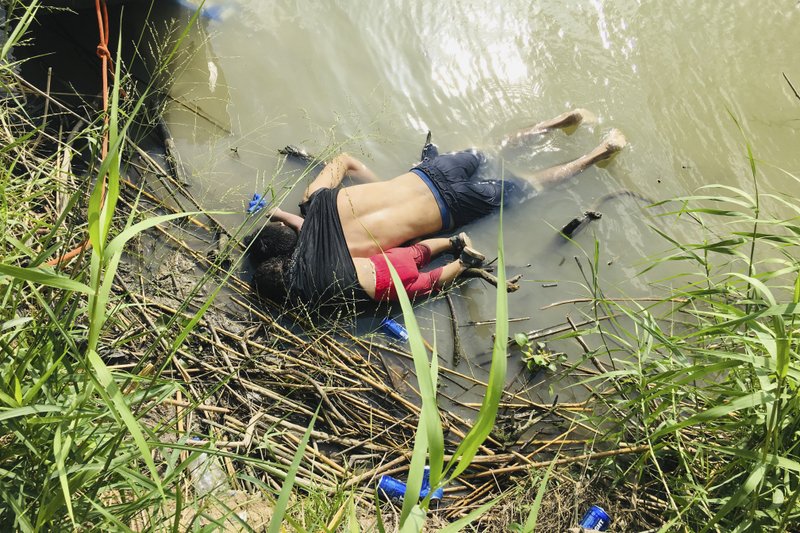 The United States has also been expanding its program under which asylum seekers wait in Mexico while their claims are processed in U.S. courts, a wait that could last many months or even years.

This week Nuevo Laredo in Tamaulipas, the same state where Matamoros is located, said it will become the latest city to receive returnees as soon as Friday.

Many migrant shelters are overflowing on the Mexican side, and cartels hold sway over much of Tamaulipas and have been known to kidnap and kill migrants.

Meanwhile, Mexico is stepping up its own crackdown on immigration in response to U.S. pressure, with much of the focus on slowing the flow in the country’s south.

“With greater crackdowns and restrictions,” said Cris Ramón, senior immigration policy analyst at the Bipartisan Policy Center think tank in Washington, “we could see more desperate measures by people trying to enter Mexico or the U.S.”

By PETER ORSI and AMY GUTHRIE