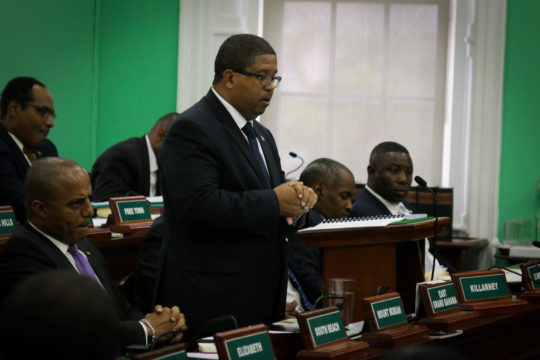 Deputy Prime Minister and Minister of Finance Peter Turnquest focused a large portion of his 2018-2019 Budget Communication in Parliament on Wednesday, on plans for improving the country’s ease of doing business ranking.

“We are explicit that we would progress public sector reform to create an efficient public service, committed to improving the ease of doing business with the government,” Turnquest said.

“We followed through on that commitment with the establishment of a private sector-led committee to develop recommendations for improvements in the ease of doing business in the country.”

The Ministry of Finance, he pointed out, created a cross-agency committee to speed up the business license application process.

That committee is said to consist of representatives from the finance ministry and other government agencies responsible for issuing approvals required to open a business including, the Department of Physical Planning, the Ministry of Works, the Department of Environmental Health Services, and the Royal Bahamas Police Force.

Turnquest also stated the main goal of the committee was to restructure the business license process, to allow faster approval times, “through better use of digital platforms that will support integration of systems between agencies for complete online services.”

“Our focus has been on making the system faster, by shortening the time required to secure both new and renewed licenses, [as well as] easier, stress-free and more citizen centered …” he said.

Further, Turnquest said, by fostering greater interagency cooperation to facilitate the acquisition of licenses, will also help ease doing business. He said business owner and aspiring entrepreneurs will also benefit from improved service delivery “via a single point of contact”.

“Upon completion in early 2019, the new system will also include the complete integration of systems between agencies and complete online services, including the submission of the applications and the reservation of business names through the Office of the Registrar General,” he said.

The local measure are expected to put the Bahamas’ global ease of doing business ranking at a much better standing.

Minister of Financial Services, Trade & Investment Brent Symonette said recently, that the areas currently under review, are related to the business license and investor proposal process, as well as various immigration processes, including work permits.

As globalization pushes countries to up their competitive edge, the minister said, addressing these three priority areas is critical to The Bahamas’ viability in an ever-changing global market.

“There are real concerns about the ease of doing business in The Bahamas, which has the potential to erode our competitive advantage in these areas globally.”