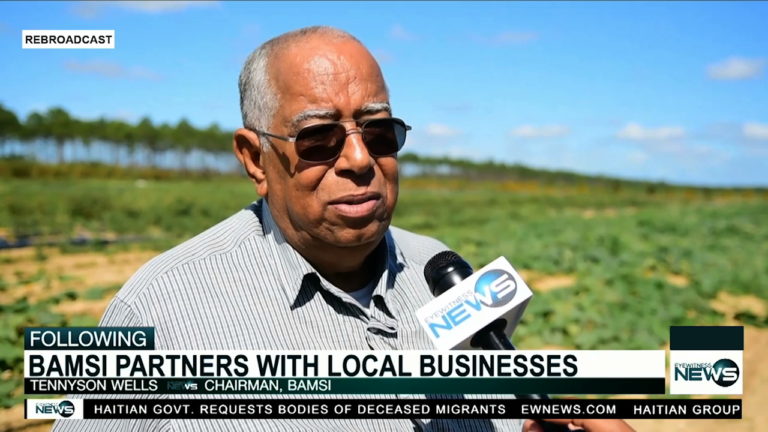 Focus now placed on distributing solely to wholesalers and retailers

NASSAU, BAHAMAS – The Bahamas Agriculture and Marine Science Institute (BAMSI) is now focusing on distributing solely to wholesalers and retailers to ensure that it is able to recover a significant return on the $7 million dollars it receives from government annually, according to BAMSI’s chairman Tennyson Wells.

The new focus is a shift from the norm for the farming operation which has previously focused heavily on balancing its educational program while retailing its farm products itself.

Wells told media Tuesday afternoon that it’s a practice that he felt was not beneficial for the operation and further aided in the annual loss which the operation faced.

BAMSI’s Chairman noted that mismanagement of the operation during the former Christie administration saw millions of dollars invested into the agriculture operation while returns only totaled an estimated $22,000 dollars.

Wells took office as BAMSI’s Chairman in February 2018 and confirmed to Eyewitness News Online Tuesday that the operation, under his leadership, is now trying to focus on distributing solely to wholesalers and retailers while providing a well-rounded educational experience for those interested in farming.

“BAMSI should not be a retailer where I can buy two pounds of tomatoes or other stuff like that. We rather sell those to the hotel and other distributors and let them do the retailing,” Wells said.

Executives from Discount Distributors, Bahama Subs, Super Value and the Sandals Resort were invited on Tuesday to tour the 800-acre compound.

“The quality I have seen is excellent and I can compare the quality here with any other fruit and vegetable that we import from throughout the world,” said Clifton Fernander, a Produce Buyer at Super Value.

“What I have seen so far is amazing,” said Sieon Wintz, the Food & Beverage Director at Sandals.

“What our guests want is freshness and local produce of The Bahamas so I see this being a fantastic venture for us.”

In addition to farming crop and rearing livestock, BAMSI has also invested in aquaculture, aquaponics and hydroponics.

Thanks to hydroponics the farm has beds of basil, arugula, chives, kale and other leafy greens.

The contingent of retailers and wholesalers that toured the BAMSI compound Tuesday all agreed that they would be interested in purchasing wholesale produce from the operation once it begins harvesting.

Wells asserted that the new thrust for business-to-business sales will position BAMSI to soon reap the fruits of its labour. He opined, however, that the operation may not begin seeing a profit margin for another three to four years.