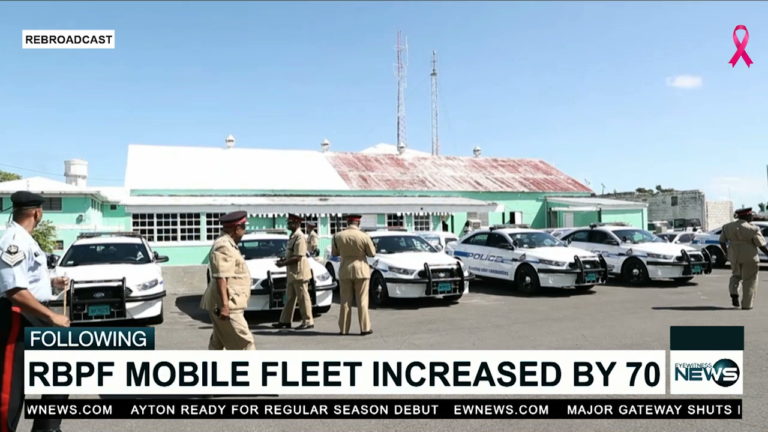 A total of $6 million was spent to purchase more than 70 vehicles to reinforce the Royal Bahamas Police Force’s (RBPF) mobile fleet.  The increase in vehicles is expected to cripple the criminal element throughout The Bahamas, according to police commissioner Anthony Ferguson.

The commissioner told media at the RBPF headquarters that crime is trending down and the new fleet of cars, which were dispersed between the Family Islands and the capital, will increase police patrols nationwide.

“Crime is trending down. I think everybody can see that from the numbers in terms of homicides and the number of armed robberies,” Ferguson said.

“Bahamians will be very happy to know that officers have been given more resources to make communities safe.  This new fleet will now complement the ones which are currently in use.”

Commissioner Ferguson confirmed that the new additions are a part of a two-phase roll-out of mobile assets for the RBPF.

“This is only the first phase of vehicles that are being issued. There is approval given for a second phase and that is being dealt with as we speak, and so over the next few weeks and months you can look to see additional vehicles throughout The Bahamas,” the commissioner revealed.

Fifty-eight vehicles were distributed to various police divisions in New Providence, 13 cars were sent to Grand Bahama while 13 jeeps were dispersed to the remaining Family Islands.

“We recognize that going into the Christmas period there will be a lot of persons going out to shop so we want to have sufficient vehicles on the road to be able to prevent persons from committing criminal acts,” he said.

While the police force welcomed the new mobile additions, commissioner Ferguson confirmed that the RBPF is in the process of increasing its manpower as well.

“We have just about 100 officers in training so very, very soon you will be able to see brand new officers joining the ranks of the force and 34 for the fire department in Grand Bahama,” he confirmed.

Theo can be contacted at tsealy@ewnews.com.