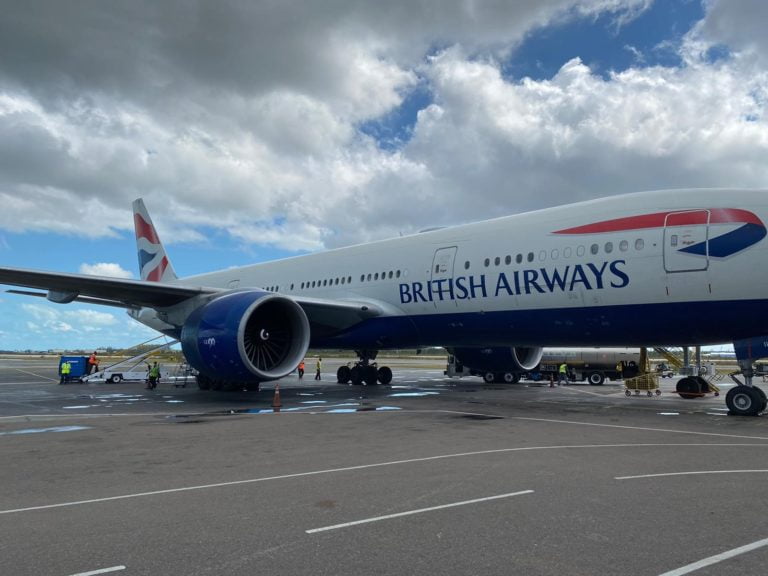 NASSAU, BAHAMAS – Some 45 British national tourists, short-term residents and their direct dependents were picked up from Nassau yesterday and flown home, along with 150 others from the Cayman Islands.

The stopover humanitarian flight operated by British Airways comes as citizens worldwide try to return to their home countries amidst the global coronavirus pandemic, which has forced the closure of borders worldwide.

The flight, organized by the British High Commission along with Bahamian authorities, the Cayman government and other UK government officials, is the first direct flight to London since the last commercial British Airways flight on 22 March.

None of the passengers on the flight were allowed to disembark in Nassau.

“We have been working tirelessly with Bahamian and British Overseas Territories officials to arrange this humanitarian flight,” said British High Commissioner Sarah Dickson.

“Humanitarian flights that fly during this outbreak of coronavirus require additional measures to be in place to ensure the health and safety of passengers, crew and airport person el.

“This flight complies with all the requirements.”

Dickson expressed gratefulness for the support received from the Office of the Prime Minister, the Ministry of Foreign Affairs, the Bahamas Civil Aviation Authority and the Nassau Airways team.

She also thanked consular and political staff across the Caribbean for their assistance in aiding British travellers who needed to return to the UK.

The High Commission recommends that British nationals remaining in The Bahamas to follow the advice and requirements of the local authorities.

After 15 years without a physical presence in the country, Britain officially reopened its High Commission in Nassau in February.

The humanitarian flight follows other government supported flights including a German flight operated by Condor airways last week from Nassau to Frankfurt.

The government has announced a nationwide shutdown until April 14 and extended the state of emergency to April 30.

The country’s borders have been closed to all incoming flights.

Always a headline ahead, around the world, ewnews, government