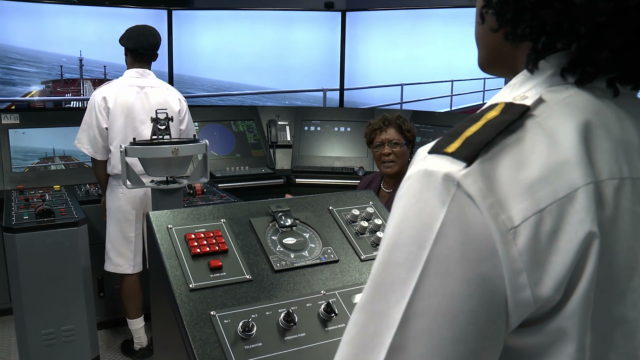 Fourth-year cadets perform a simulated exercise for media at the LJM Maritime Academy.

As the country’s first internationally accredited Lowell J. Mortimer (LJM) Maritime Academy is preparing to say goodbye to its first batch of cadets, educators at the institution are expecting a new group of excited potential seafarers at the start of the 2018 semester in September.

The current 35 cadets enrolled at the Lowell J. Mortimer Maritime Academy have successfully completed their training and are now preparing for their graduation.

This will be the first group of cadets to complete the academy’s four-year program.

The maritime academy which launched in 2014, is a tertiary-level institution, which facilitates the education and training of Bahamian seafarers.

The institution, which is accredited by the International Maritime Organization (IMO), boasts of a very robust programme, which is on par with notable international schools such as SUNY Maritime in New York.

LJM Maritime Academy executives and cadets, have launched a nationwide call for persons interested in a career in the maritime industry, to strongly consider signing up.

Fourth-year cadet Chante Pearson told Eyewitness News, that the program has literally introduced her to the world.

“I have spent actually nine months on board of a vessel and I have seen so much of the world. I’ve been to Barcelona, Africa, Italy, Jerusalem, Israel, Ukraine and so much move. The experience you gain, and the different cultures that you get to interact with, it broadens your horizon,” shared Pearson.

“When you’re out there, you get to learn more and then come home and share them with Bahamians building the maritime field within The Bahamas.”

“We now have in the academy, ‘Campbell Scholars,’ and those persons come into the academy with a sponsorship from Campbell’s Shipping and they are funded through the entire program and then receive employment once they are done with the program,” said Willamae Johnson, academy librarian.

“So, we are looking for more sponsors like that, where they can take a cadet from entry and take them onto their ships for internships and when they are finished, they become employees of that company.”

It takes a little under $30,000 thousand dollars to fund the entire four-year program.

Persons who are interested in a career in the maritime industry can access more information at www.ljmma.edu.bs.