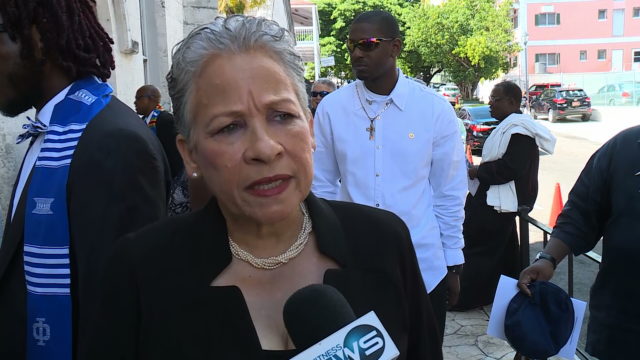 “The member was anxious to speak to the Western Air terminal and did so in a way which suggested some untoward action or considerations,” Hanna-Martin said during her contribution to the 2019/2020 budget debate.

“He was misleading; deliberately misrepresenting the facts.”

During his contribution to the 2019/2020 budget debate last Thursday, D’Aguilar accused the previous administration of entering a bad deal with Western Air to lease its terminal in San Andros for over $800,000 over a four-year period — $205,400 per year.

According to the minister, the deal was ordered just days before the last election.

D’Aguilar asserted that the move was motivated by special interests, a claimed refuted by Hanna-Martin.

But the tourism minister said Hanna-Martin authorized the Airport Authority to relocate.
The board has previously been housed in “dilapidated trailers”.

While D’Aguilar said he did not fault Hanna-Martin for the move as the trailers had been allowed to deteriorate into “mold infested hellholes”, he said the move came at an “enormous expense” to taxpayers.

“When I took office and learned that the Airport Authority was paying $60 a square foot to rent space in a building in Andros, at a staggering cost of $205,200 a year, I said, ‘hell no’.

“This lease was brought to my attention when it came up for renewal in February 2018 and the landlord requested an increase in the rent to $84 a square foot. Once again, Mr. Speaker, I had to say ‘hell no’.”

The minister noted that the cost of the project to install new trailers, which has been completed under the current board, will cost approximately $150,000.

The board will move into the new trailers.

But Hann-Martin said yesterday, “The truth is though is that the trailers that housed airport personnel, customs, immigration, airport and security etc. in North Andros deteriorated to such an extent that it became a health emergency and varying government agencies had to quit, literally immediately.”

She said while there was a real threat to the health of Bahamian personnel, the owner of Western Air stepped in immediately, and the government was mindful of not disrupting service at the airport in the interest of Andros’ economy.

She said it was intended to be a short-term solution.

Last week, D’Aguilar said he was advised that the Ministry of Tourism, for example, rents its office in the British American Financial Building for $25 per square foot.

“Yet, the Airport Authority was ordered on May 4, 2017 by the previous administration to enter into a lease, which, by the way was never executed since no one seems to have a copy of it, retroactive to March 2015 to rent 3,063 square feet in the Western Air Terminal for $60 a square foot,” D’Aguilar said.

However, Hanna-Martin said to compare rental rates in New Providence to those in Andros is also misleading. She also noted that the rental agreement was approved by Cabinet and vetted by the Office of the Attorney General.

She added that the rental included all utilities, janitorial services and ultimately the arrangement was brought to bear as an offset to taxes owned by the shareholders of Western Air.

“The member of Freetown indicted himself by his own words by explaining himself why is his words ‘hell no’ — that’s what he told us — the arrangement persisted under his watch for two years,” Hanna-Martin said.

“And it’s because he claims he’s so busy and it’s a big ministry — you heard him — but yet he comes here to point a finger and pat himself on the back.

“If it is the terrible deal, that he says it is, which we do not accept — I want the record to reflect that — it was never intended to be long term, but became long term under his watch and at his hand, and his concerns are of his own making and due to his negligence.

“Further, the reference to special interest is gratuitous and a lame effort to create a fake scandal.

Hanna-Martin noted that one of the co-owners of Western Air was a Free National Movement candidate in the last general election. She charged, “I wonder how she and her family feels hearing their name bandied about in this House in a manner suggesting some irregularity or disrepute. The Western Air family have excelled in this country and their success should not be begrudged by someone who looks like he has a problem with certain people acquiring wealth including those In the gaming industry.

In an interview with The Nassau Guardian, Western Air Vice President of Operation and General Counsel Sherrexcia Rolle refuted D’Aguilar’s claims that the government entered into a bad deal and said she does not want the company to be used as a scapegoat.

According to Rolle, Western Air received its first payment under the Minnis administration on May 22, 2017.