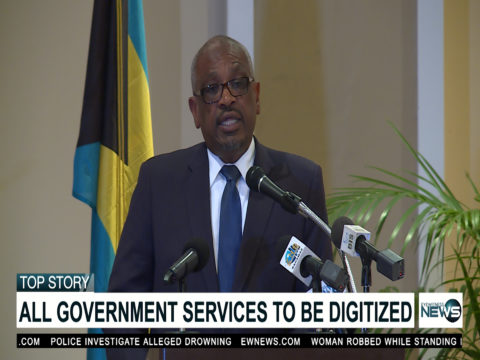 NASSAU, BAHMAS – As the government will receive a $30 million dollar loan from the Inter-American Development Bank (IDB) to carry out a digital transformation of the public service, Prime Minister Dr. Hubert Minnis assured on Monday that there would be no more long lines at the Passport Office.

The prime minister’s comments came while speaking at  the signing ceremony for IDB Loans for: Government’s Digital Transformation to Strengthen Competitiveness, and a Contingent Loan for Natural Disasters at the Meliã Nassau Beach Resort.

The prime minister said the move will also bring an end to years of frustration that some must endure when visiting government offices.

“This is ridiculous and unfair. The new system will be designed for interoperability in which requisite data will be verified by the system,” he said.

“No longer will the Passport Office or the Ministry of the Public Service ask you for your birth certificate or marriage certificate. Citizens and residents will only need to carry one card which will likely be a modified version of the NIB card.

“This will be an electronic identification with a digital signature, instead of passport, drivers’ license, etc.”

According to the prime minister, on-line services will be accessed through a single window facility at international standards for infrastructure and applications, as well as with security and service delivery at the forefront.

He said the public should also be assured that a significant part of the programme will be the upgrading of cyber security to ensure that the government’s services and a person’s personal information is protected.

He said the government is designing a pilot programme which will involve renewals of passports and drivers’ licenses and the verification of birth certificates and police certificates, which will all be done on online.

“Once fully implemented Bahamians should be able to fully and securely apply online for these services without physically providing birth certificates, marriage certificates, and police certificates. Yes, that means no more Passport office lines for renewals,” he said.

“A second pilot is also being designed for e-Cabinet that will increase the efficiency in government. This programme will cause Cabinet memoranda and decisions to be paperless. Our decisions and the implementation of those decisions should be faster and more efficient.”

When asked when the public can expect the new digital changes, the prime minister responded, “soon”.