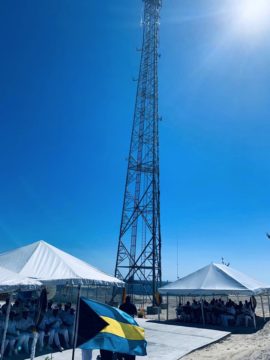 A $2 million-dollar long range coastal radar was commissioned at the Royal Bahamas Defence Force (RBDF) Inagua base on Wednesday. The new equipment is expected to enhance the detection of illicit activity within the country’s maritime domain.

The new equipment was made available to The Bahamas by the Government of The United States of America (USA) through the U.S. Embassy in The Bahamas.

The prime minister was joined by his Cabinet, Tellis Bethel, RBDF Commodore; Stephanie Bowers, U.S. Charge D’Affaires; officials from the US Coast Guard and other government officials were on hand for yesterday’s official commissioning ceremony.

“Great Inagua is the first island in our archipelago to receive this state-of-the art coastal radar system,” revealed the prime minister.

“A second radar will be erected on New Providence and there are plans for two more of these radar systems.”

In addition to these technological advancements, the RBDF continues its efforts to decentralize its operations, according to national security minister Marvin Dames.

He revealed that the RBDF Inagua base will be expanded and that a new base will be constructed at Ragged Island as well.

“To ensure that the entire base at Inagua is brought up to standard and to compliment this new technology, contracts were signed totaling $573 million dollars with three construction companies on the island for the rebuilding of new units,” Dames said.

“The new structure will include a sick bay, detention centre and a mechanical building.

“The total proposed projected capitalization and development including the decentralization program over the next three budget cycles is expected to cost approximately $133 million dollars.”

Both bases, in Inagua and Ragged Island, will be equipped with various detection and tracking technologies, according to Dames.

Last week, Cabinet approved a proposal to implement a Bahamas Unmanned Aerial System that will be managed by the RBDF.

This drone program includes immediate surveillance capabilities, as well as training in drones, the purchasing of drones and the development of a drone academy and workshop.

Government touts that all of these technological and infrastructure upgrades will enhance national security.