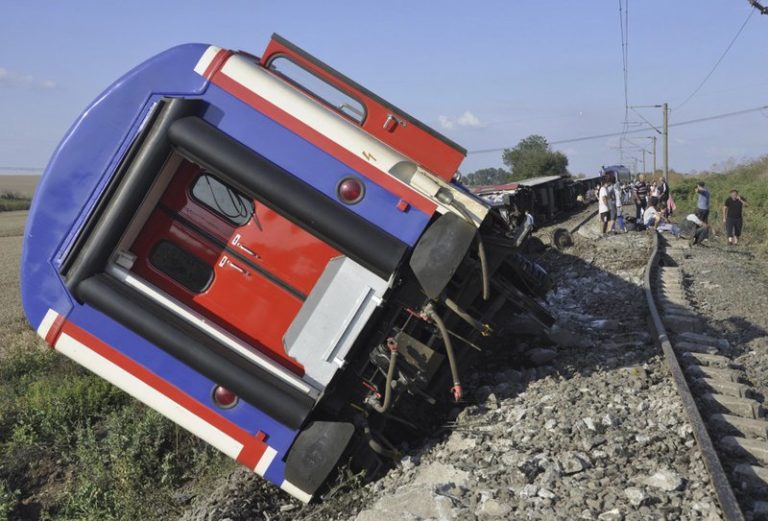 An overturned train car is seen near a village at Tekirdag province, Turkey Sunday, July 8, 2018. At least 10 people were killed and more than 70 injured Sunday when multiple cars of a train derailed in western Turkey, a Turkish official said. (Mehmet Yirun/DHA-Depo Photos via AP)

The train was heading to Istanbul from Edirne, on the border with Greece, with 362 passengers and six crew members on board. Five of its six cars derailed.

Health Minister Ahmet Demircan said 318 were injured, with 124 of them still hospitalized.

Transport Minister Ahmet Arslan said other trains had used the route earlier Sunday, and that the rain caused “extraordinary swelling” under the tracks.

But critics say the derailment could have been prevented. Experts from a Turkish engineering union issued a statement saying a drainage system was incorrectly built.

The union added that the government has cut costs, including eliminating route inspector jobs about five years ago. It said that inspectors would have identified the collapsed ground and stopped the train before it reached that section of track.

“This disaster took place because of foreseeable and preventable reasons,” the statement said.

Turkey’s official Anadolu news agency said two machinists were called in for questioning at the prosecutor’s office. Turkish authorities, including President Recep Tayyip Erdogan, have said the derailment is being fully investigated.