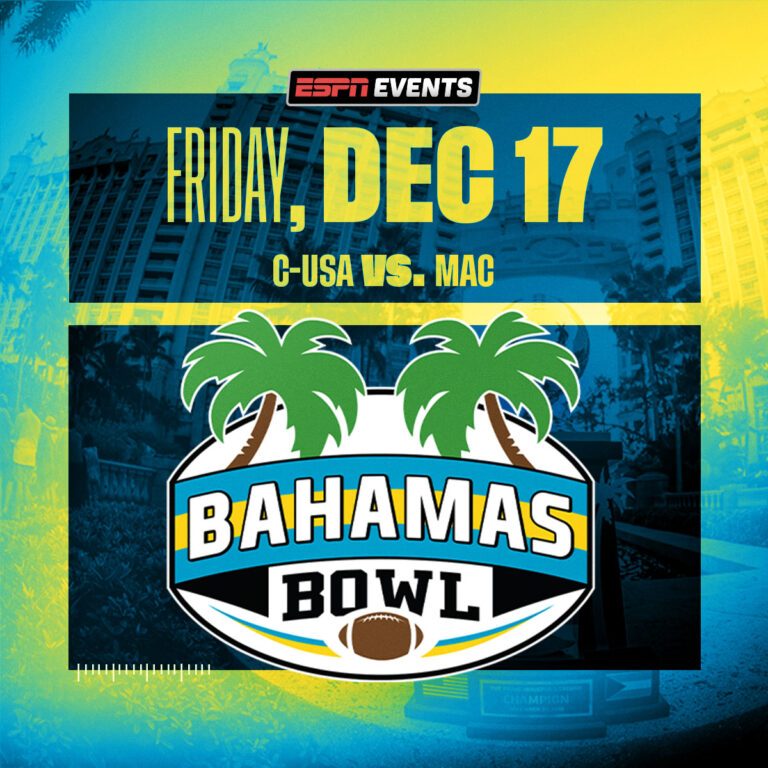 NASSAU, Bahamas – The 2021 bowl season will begin in the Bahamas this year as the longest-running international bowl game in college football history, the Bahamas Bowl, will be played Friday, Dec. 17 at noon ET.

After a year away due to the pandemic, the Bahamas Bowl will play its seventh edition in Nassau’s 15,000-seat Thomas A. Robinson National Stadium, and the game will air in the United States on ESPN.

“We are thrilled to return to the bowl lineup and to be the opening game of Bowl Season this year,” said Bahamas Bowl executive director Richard Giannini. “The bowl has been a fixture on the Bahamas sporting calendar since 2014, and the game has provided tremendous competition for our partner conferences at Conference USA and the Mid-American Conference. We have a fun gameday atmosphere for our fans who attend the bowl, and it is a yearly showcase of the beauty of the Bahamas on ESPN. We know that the 2021 bowl will remind everyone why ‘Bowl Games are Better in The Bahamas’.”

Each year, American football fans travel to Nassau to see their universities play in the only bowl game played currently outside the United States. The inaugural bowl game in 2014 saw WKU beat Central Michigan 49-48 in a memorable offensive shootout. In 2015, Western Michigan beat Middle Tennessee 45-31, Old Dominion held off Eastern Michigan 24-20 in the 2016 game, Ohio beat UAB 41-6 in 2017, FIU rallied to beat Toledo 35-32 in 2018 and Buffalo defeated Charlotte 31-9 in 2019.

As with the first six editions, the 2021 Bahamas Bowl will feature teams from Conference USA and the Mid-American Conference.

For more information on the 2021 Bahamas Bowl, visit BahamasBowl.com. The game is one of 17 college bowl games owned and operated by ESPN Events, a division of ESPN.