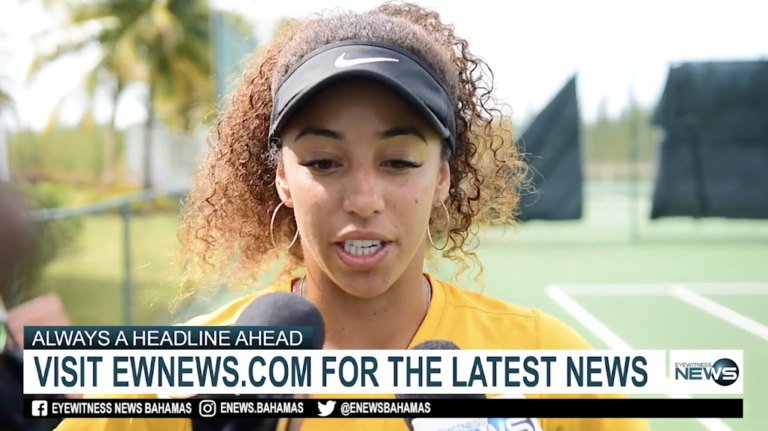 NASSAU, BAHAMAS – The players representing the country at the 2019 Fed Cup in Lima, Peru appears to be in high spirits ahead of next week’s tournament.

Team members Kerrie Cartwright (Player/Coach), Danielle Thompson, and newcomer Sydney Clarke, yesterday, in interviews with Eyewitness Sports, said they look forward to playing together and representing the country against high-level competition. Sierra Donaldson couldn’t attend yesterday’s practice due to prior school obligations. She’ll meet up with the team at the tournament.

“This is a really good group of girls we have going out next week to compete,” Cartwright said. “We are very familiar with each other, and we really get along well with each other. Although the tournament came up really fast, we all have been working individually preparing our bodies to getting ready to compete.

“I’m not too sure of who is coming down for this year’s event in terms of competition, but whoever it is, we are confident in our team.”

Danielle Thompson comes into the tournament off a stellar 2018 season in the collegiate ranks. The former Morgan State University standout was named as a nominee for the National Collegiate Athletic Association (NCAA) Woman of the Year Award.

As for Clarke, this will be her first time competing at the Fed Cup. Last month, she was ranked as the No.4 ranked junior player in the region by the Confederation of Tennis of Central America and the Caribbean (COTECC).

“I feel a little bit of pressure being the youngest player on the team, but I’m just looking forward to this experience,” Clarke said. “We have been working hard to prepare and I know we will have a good showing.”

The four-day competition is set for the clay courts of the Tennis Club Las Terrazas Miraflores in Lima.

Fed Cup is the premier tennis competition for female team play. The Bahamas will compete against a number of nations including host nation Peru, Bolivia, Barbados, Trinidad & Tobago, Panama and Costa Rica.

The countries will be divided into two pools. The winners of each pool will face off with the winner advancing to the Americas Group I in 2020.