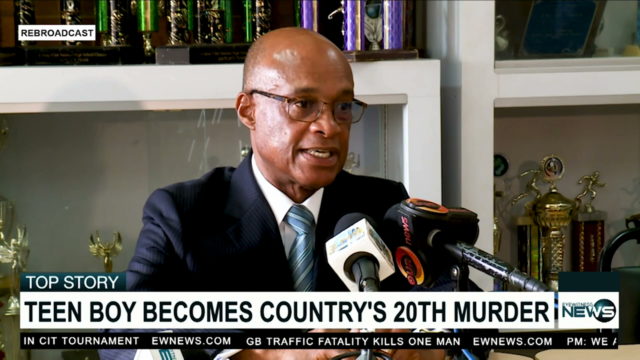 NASSAU, BAHAMAS – Police have two teenagers in custody in connection with Tuesday’s brazen daylight murder which claimed the life of a junior high school student who was on his way home from school, according to Education Minister Jeffery Lloyd.

The victim has been identified as 15-year-old Perry Rolle; a ninth-grade student at T.A. Thompson Junior High School.

The stabbing incident pushed the country’s murder count to 20 for the year.

Police reports indicate that Rolle was allegedly attacked by a student from C.C. Sweeting Senior High School while walking on Pitt Road.

“He tried to protect himself from the bullying before, but they still wouldn’t stop,” she said.

“They made two first attempts, but this one was the third one that ended his life.”

Louis said she cannot find the answers as to why anyone would harm her child.

“The children at his school love him, the teachers and administrators too; never any complaints. He was just well loved,” she asserted.

Sorrowful screams pierced the air yesterday as the student body at the victim’s school tried to come to grips with the stabbing death of their schoolmate.

Greif counsellors were called in to provide comfort and counselling to the grieving student body.

In the wake of that shocking incident, Lloyd visited the campuses of both T.A. Thompson and C.C. Sweeting schools Wednesday morning.

He indicated that the stabbing incident is the result of an ongoing turf war.

“There seems to be a social dissonance that resonates in this vicinity among the three schools that neighbour each other; T.A. Thompson, T.G. Glover and C.C. Sweeting,” Lloyd noted.

“We are continuing in our efforts to bring our young people to a sense of respect for themselves and each other.”

According to the victim’s mother, his school friends now want revenge.

“I spoke to the male students today and they want revenge, but I told them that they do not need to do that; they have a whole future ahead of them,” she said.

The education minister maintains that schools are safe.

However, he asserted that more work needs to be done to properly socialize kids at home.

“Disputes will arise, that’s just the nature of human life,” he said.

“But, how we deal with them is a reflection of how they have been socialized, trained and brought up.”

Police have given no indication if either of the two juveniles they have in custody are responsible for the incident.