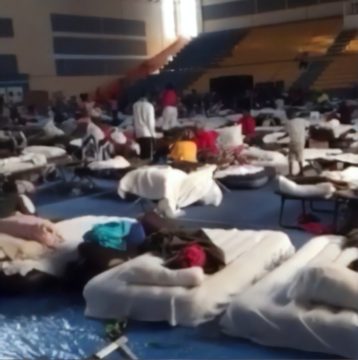 Officials see no evidence of an outbreak as it continues its usual surveillance. The matter was discovered on December 6.

“As per surveillance and public health protocol, all of that individual’s contact require screening,” Sands told Eyewitness News Online.

“Screening for TB is the skin test, or Mantoux and we have started that protest, so all of the [Hurricane Dorian] evacuees in the K.G.L Issacs Gym are being screen, as well as all of the staff who would have interacted with them.

“Thus far I am informed that just under 40, I think that number is 36, individuals have had positive skin tests and they now go to the next step which would be chest x-rays.

Sands underscored that there has only been on case of tuberculosis discovered.

Hurricane Dorian mercilessly pummeled into Grand Bahama and Abaco in early September, displacing thousands, and killing at least 70, but officials have estimated the final death toll to be “staggering”.

In the aftermath of the storm, thousands were evacuated to New Providence and placed in shelters throughout the island city.

Over time, the shelter numbers have dwindled as officials have amalgamated shelterees into two shelters.

As of Monday, 497 shelterees still reside on the designated sites: 380 at the Kendal GL Isaacs Gymnasium and three tents, and 117 at the Bahamas Academy Gymnasium.

The government has said it plans to have those shelters closed before the end of the year, though details remain unclear on how it will deal with those evacuees.

Asked whether the ministry will have to reach out to those shelterees who have since left the shelter, Sands said, “ Again, we have just started and yes the ideal scenario would be to ensure that everybody is screened or as many people as you can locate, would be screened.

“We would also have to go into the juvenile’s school.

“…It would be the usual public health campaign to screen exposures or contacts.

Eyewitness News Online understands that the teenager is a student at A.F. Adderley Junior High School.

There have been 36 people screened at the school as of Wednesday.

Additionally, 273 people have been screened at the Kendal G. L. Issacs Gymnasium.

Of that number 195 tests have been read and 65 remain unread.

One hundred and thirty-two tests were found negative and 63 had positive Mantoux screenings.

No need for panic

The minister of health assured Bahamians yesterday that there is no need for panic.

“I remind the public that each time we go through this that The Bahamas is a low TB prevalence country and the reason it remains slow is because we are aggressive in dealing with contact tracing and managing documented cases,” Sands said.

“So any individuals who are found to be Mantoux positive, we then look at their history.

“If they are recent immersions then they would get prophylaxis.

“If they have an abnormal chest x-ray, positive sputum, they would be treated with for or five drug therapy for active TB in hospital in the first instance.

He noted that The Bahamas has had less than 100 cases of tuberculosis thus far in 2019.

“I believe the number is even less than 60, which is quite good,” he continued.

“We are going to continue the climb or the descent until we get that to an irreducible minimum.”

The health minister added that the government is pleased with its ability to detect and to treat tuberculosis in The Bahamas.

“So once it is identified then we must do the appropriate public health screening activity and there is absolutely no need for any panic.

“We’ve said that repeatedly each time.”