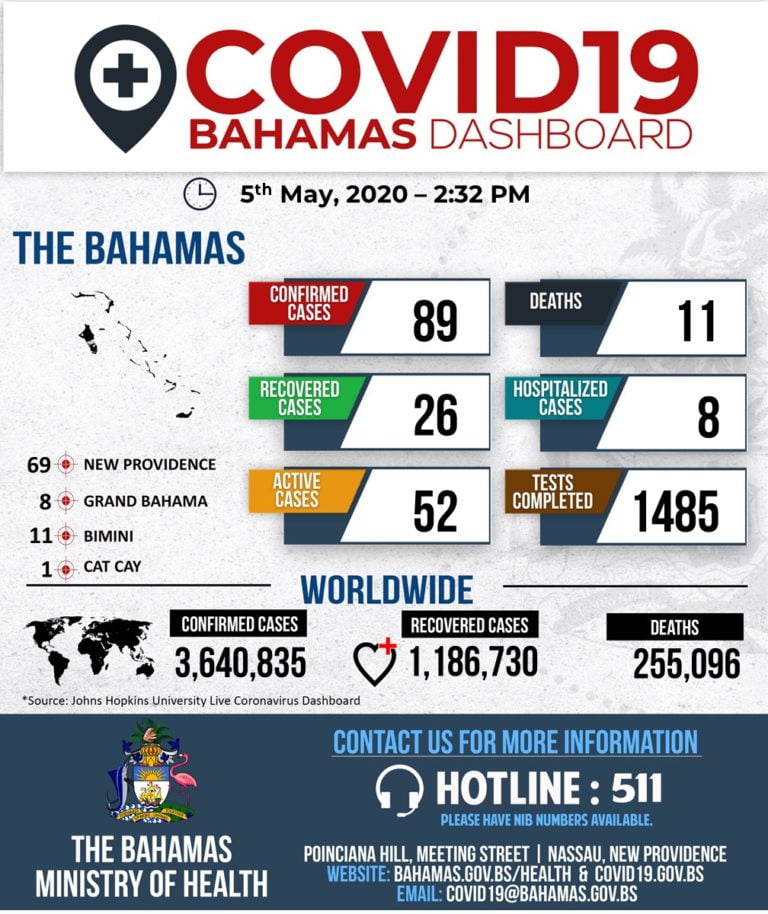 NASSAU, BAHAMAS –  The Ministry of Health has confirmed an additional five cases of coronavirus (COVID-19) in The Bahamas.

This brings the total number of cases up to 89.

Among the newly confirmed cases is a 15-year-old girl from Bimini.

Two more cases have been confirmed on the island, including a 36-year-old man and a 25-year-old man.

There was also an additional case on New Providence and Grand Bahama respectively.

None of the recent cases have a history of travel.

Health official advised that the new patients are all in isolation at home.

There have been 69 confirmed cases in New Providence, 11 on Bimini, eight in Grand Bahama, and one in Cat Cay.

Kim Johnson-Rolle, the sister of Immigration minister Elsworth Johnson, died in Princess Margaret Hospital shortly after being airlifted from Bimini on March 30.

The latest cases come as the country awaits the replacement of former Health Minister Dr. Duane Sands, who resigned yesterday.

Sands took responsibility for the “protocol breach” that led to the entry of an American.. family of six into the country amid the border shutdown.

Always a headline ahead, around the world, Bahamas, Bahamas news, coronavirus, ewnews

Nassau mailboat to Bimini, due Thursday, 5-6-2020, reported to residents on Nassau that the mailboat was restricted from going to North Bimini this week. Many on Bimini are awaiting shipment of both food and supplies.